Talasa Prime is an Imperial Fortress World, that has been gifted in perpetuity to the Deathwatch by the Ultramarines Chapter.[5]

It is home to a large Inquisitorial Fortress of the Ordo Xenos, and is most notable for housing the headquarters of the Deathwatch Chapter of the Space Marines, known as the alien hunters. Talasa Prime now serves as its main training site, where the Deathwatch recruits, equips, and trains Space Marines in the art of hunting Xenos[1]. The Fortress also recruits, trains and equips Kill-Teams composed from the Ultramarines, Scythes of the Emperor and Lamenters Chapters for service against the Tyranids.[2]

Since the creation of the Great Rift, however, the influx of Space Marines from the Imperium Nihilus has all but stopped. Rumors suggest the Watch Fortresses of Praefex Venatoris and Fort Excalibris, now share the responsibility for training those Deathwatch members that are active in that blighted realm.[5]

Talasa Prime hosts five Watch Companies worth of Kill-Teams, in addition to its headquarters staff.[4] 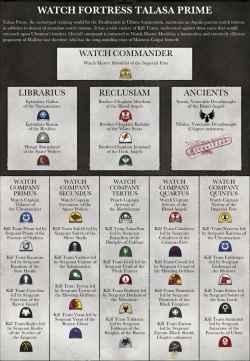