From Warhammer 40k - Lexicanum
(Redirected from Tales of Heresy)
Jump to: navigation, search 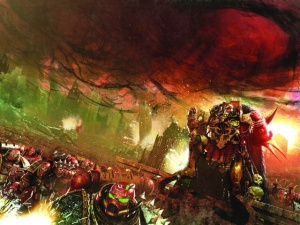 Tales of Heresy, edited by Nick Kyme and Lindsey Priestley, is the tenth book in the Horus Heresy Series and is a collection of seven short stories, written by some of the series' authors. The book was published on March 14, 2009. It was later included in "The Novels: Volume 2" eBook collection and as an audiobook collection.

When Horus, the Warmaster, rebelled against the Emperor, the ensuing civil war nearly destroyed the Imperium. War raged across the galaxy, pitting Astartes against their battle–brothers in a struggle where death was the only victor.

Amongst the sprawling hives of Terra, Amon Tauromachian of the Emperor's Custodians plays a deadly game as he investigates rumours of treason on humanity's home world.

Wolf at the Door

The Thirteenth Company of the Space Wolves defend an Imperial world from vile alien raiders, but as the war drags on, the beast within each of Russ' brothers threatens to overwhelm them...

Scions of the Storm

The Word Bearers encounter a planet where worship of the Dark Gods echoes their own nascent beliefs. Will they purge this world or embrace its darkness?

When a Black Ship full of captured psykers goes awry, the Sisters of Silence board it to discover what happened. But a mysterious voice threatens to destroy them.

Call of the Lion

The Terran and Calibanite commanders of the Dark Angels clash for the first time as the Great Crusade brings them to the world of Byzanthis.

As the unification of Terra draws to a close, the priest of the world's last church plays host to a visitor who questions his every belief. Who is the stranger, and what does his visit portend?

The War Hounds Legion have been reunited with their primarch. It is a time for rejoicing... isn't it? The masters of the Legion gather to discuss their new master, while the primarch, Angron, lurks in the darkness. Can Khârn unite master and servants?