Tallarn: Executioner is a limited-release novella written by John French and part of the Horus Heresy series. It describes the virus bombing of Tallarn and the beginning of the battle for that world.

As one of the Imperium's many staging grounds for the forces serving in the Great Crusade, the verdant world of Tallarn has long served as a transfer point for vast numbers of military personnel and their war machines. Now, destroyed by a deadly virus-bomb attack launched by the battered Iron Warriors fleet, the entire world is reduced to a toxic wasteland where the survivors must fight to defend what little remains of their home. The remnants of the once-mighty Jurnian 701st armoured regiment emerge from their underground shelters, and the opening movements of the Battle of Tallarn begin...[1] 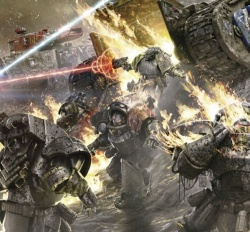