The Tallarn Desert Raiders are the Imperial Guard Regiments raised from the bleak desert world of Tallarn.[Needs Citation] 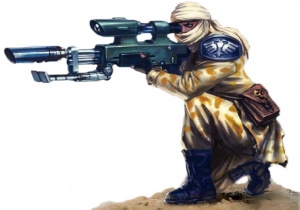 Tallarn Desert Raider with a Long-las[5]

As a barren desert planet with so little to offer the Imperium besides manpower, Tallarn has made exporting soldiers its primary contribution to mankind. History dictates the future, and Tallarn is no exception to this. Following the desecration of their homeworld during the Horus Heresy by the Iron Warriors that saw their once fertile Agri-World reduced to waste, the Tallarn have been forced to make use of Mechanised Armour and APC's in order to safely move their infantry across the barren wasteland of their homeworld. As a result, the Tallarn Desert Raiders are also well known in their use of armoured warfare and their tank crews are some of the most renowned in the Imperium.[3]

Honing their skills on their homeworld, Tallarn are mobile guerrilla fighters, evasive and opportunistic.[5] They are well known for their hard-fighting Sentinel squadrons and are masters of hit-and-run warfare. Their chief strength lies in their skill in guerrilla warfare, which makes use of various mounts as well as numerous Sentinel squadrons to remain highly mobile on the battlefield, harrying their opponents mercilessly before disappearing into the background. Noted marksmen, Tallarn forces employ a unique style of lasgun which is longer and more fluid in shape than the standard Imperial Guard issue.[Needs Citation]

Some Tallarn Rough Rider squadrons ride large alien mounts, called Mukaali. These desert-dwelling herbivores are originally indigenous to the vast equatorial deserts of Goru-Prime. Many Mukaali have been transported to other desert worlds, including Tallarn itself, because they are well adapted to arid environments.[7a] As well as infantry, artillery and armoured companies, it is not uncommon for Tallarn regiments to include one or more patrol companies (sometimes referred to as recon or long range companies). Tallarn Armored units emphasize the three doctrines of their homeworld: stealth, swiftness, and the killing blow.[1][5]

The Tallarn use the title Duf'adar as opposed to "Sergeant" as the origin of the word sergeant means servant and they claim to be no man's servant.[2b]

Owing to the harsh climate and the constant raging sandstorms of their homeworld, the Tallarn have a distinctive desert combat garb consisting of light, loose cottons, a wraparound head-scarf (known as a kefiya[2a] or shemagh)[7b] and canvas boots. They make use of curved knives.[Needs Citation]

As special weapons, the Tallarn prefer the plasma gun and the missile launcher. Both weapons suit the Tallarn preference for hit and run attacks, and are prized for their ability to deliver a crippling blow as well as for their relative ease of transport.[5]