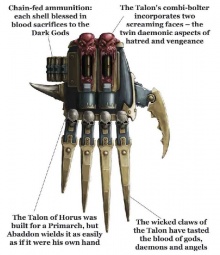 The Talon of Horus

The Talon of Horus is a large Lightning Claw, fitted with an early custom-built Storm Bolter that is wielded by Abaddon the Despoiler.

The Talon of Horus was originally built by the Dark Mechanicum for Warmaster Horus shortly before the start of the Horus Heresy, but was taken up by Abaddon after his master's death and the reclamation of Horus' body from the hands of the Emperor's Children following the Battle of Harmony.[1][2]

The weapon takes the form of a large silver lighting claw with thumb blade and integral storm bolter that runs from the wrist to knuckles of the gauntlet. The ancient bolter fires to the same effect as a modern storm bolter. Two belts of ammunition are fed into the weapon from the right side and howling faces of daemons cover the casing ejectors.