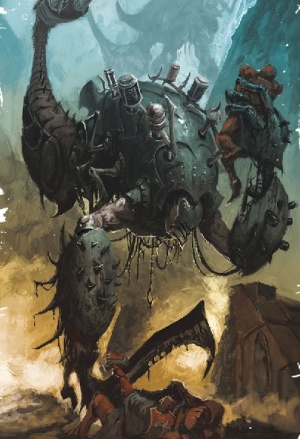 The Talos is a Dark Eldar Engine of Pain. They are semi-sentient, part organic and part mechanical monsters that slowly drift along on anti-gravitic motors.

Their armament consists of a variety of unholy weapons, horrible surgical tools, and a metallic shell that makes it all but impervious to enemy fire. They are created by the Haemonculi and seen as the pinnacle of the Haemonculi's art. For their Haemonculi masters, they serve as both guard-creatures as well as mobile torture chambers that inflict horrible agonies upon their victims.[1]

Anyone unfortunate enough to be caught by a Talos will by rapidly dissected by an array of manipulators, scalpel-keen claws and surgically sharp tools. As the Talos gruesomely flays its victim layer by layer, it feeds and draws every removed part into itself, invigorating itself with even greater power as well as at the same time putting on an amusing display of torture for its owner. After battle the constituents of its victims are siphoned out from within its metallic shell and used by the Haemonculi to create exotic potions and elixirs.[1]

A Talos is usually equipped with a twin-linked Splinter Cannons and one or two Close combat weapons such as a Chain-Flail or Macro-Scalpel.[2]

It can exchange one of its Close-combat weapons for one of the following:

It can exchange its twin-linked Splinter Cannon for one of the following:

Taloses are the creation of an Haemonculi's mad genius and vary greatly in their design. Some well-known variations are known to exist.