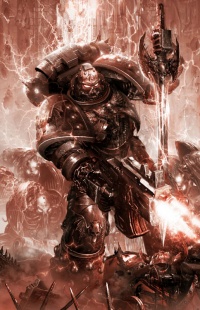 Talos Valcoran, the Soul Hunter
Talos Valcoran[2] also known as the Soul Hunter, is a member of First Claw, 10th Company, Night Lords Legion. He is somewhat of a prophet among his warband, for he, like his gene-father Konrad Curze before him, bears the curse of foreknowledge.

Talos was recruited into the Legion relatively late in the Great Crusade, after Night Haunter had left Nostramo and after it had begun to slip back into its degenerate ways. Throughout the Crusade and the Horus Heresy he was an Apothecary of the same company. He is noted to have been within the Primarch's inner circle, conversing with him many times in private. After the Horus Heresy Talos was driven by a vision and as a result he and First Claw were the first Night Lords to meet Konrad Curze on the surface of Tsagualsa. By this point Curze had already begun addressing Talos as Soul Hunter.[4]

Following Konrad Curze's death, Talos was the first to hunt the assassin M'Shen in the name of vengeance, even though this disobeyed his Primarch's last order. The rest of the legion tried to dissuade him from the hunt, but he was committed. The rest of his Legion only joined the hunt when they realised that the assassin had also stolen several of the Legion's relics (including the Corona Nox), which many captains believed were theirs to inherit. Talos didn't care for such trinkets, only for vengeance in his father's name. M'Shen was eventually killed by the Soul Hunter after the Night Lords' fleet gave chase to her vessel and after the subsequent Eldar ambush.

Talos' relentless pursuit of his father's assassin is the reason for his namesake Soul Hunter, "One soul. You will hunt one shining soul while all others turn their backs on vengeance."[1]

Following the shattering of the Night Lords as an organized legion after the death of their Primarch, Talos would follow Vandred Anrathi as part of the The Exalted. On the world of Crythe, Talos would refuse servitude to Abaddon the Despoiler and his Dark Gods, and later abandoned the Black Legion forces after the Despoiler attempted to use First Claw as a way to shield his own forces against an Imperial warfleet.[1] Later, Talos and The Exalted would play a key role in the Fall of Vilamus, allied with Huron Blackheart and the Red Corsairs. This alliance fell apart quickly as well, with the Night Lords stealing the Red Corsair (and formerly Night Lord) Battle Barge Echo of Damnation as the battle raged. As the Red Corsairs fleet pursued, Vandred would give his life to allow the escape of Talos and First Claw. Talos was thus left in command of First Claw and its allies.[3] Talos' visions would eventually guide him and his men back to Tsagualsa, the place where their Primarch had fallen so many centuries earlier. Here, they laid waste to the planet's colonist population but found themselves ambushed by Ulthwé Eldar looking to again kill the Soul Hunter before he could become a threat to their race. In the ensuing battle, nearly every member of Talos' warband was slain and he himself became embroiled in a desperate single battle with the Phoenix Lord Jain Zar. Talos allowed himself to take the Phoenix Lord's spear through his chest, and then detonated a grenade to kill them both. However the blast stopped short of killing the Phoenix Lord, whose crippled body was finished off by Malcharion.[2]

Ultimately, Variel was able to salvage Talos' gene-seed to create a new Prophet for the Night Lords at the cusp of the 13th Black Crusade.[3]