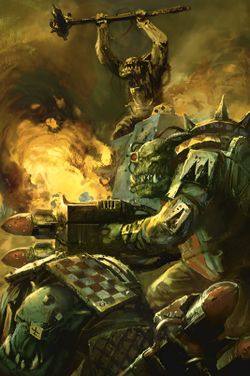 Tankbustas are a specialist Ork warriors who are fixated with the undeniable thrill of scoring a direct hit on an enemy tank.

The elation Tankbustas feel has a primal heritage, similar to the thrill a Feral Ork would feel when they killed a rampaging Squiggoth. Orks that fancy this kind of thrill often gather together, forming mobs of Tankbustas. Tankbustas who prove especially adept at destroying enemy vehicles from a distance enjoy the fame of a big game hunter and will often attract a retinue of aspirants, who have yet to blow up their first tank. A Tankbusta who succeeded in skoring his first confirmed kill enjoys getting 'tanked up' after the batttle, a ritual that includes devouring tank's crew and drinking engine oil from its smoking remains.[1]

As befits deadly anti-tank infantry, Tankbustas are equipped with Rokkit Launchas and Tankbusta Bombs that they can attach to enemy vehicles to enjoy a following explosion. Veteran Tankbustas often carry around some parts of the vehicles they have destroyed or equipment from their drivers to show their victories. It is common for Tankbustas to wear armour fashioned from pieces of a destroyed tank or to sport nuts and cogs as crude jewellery. Some Tankbustas feature unusual equipment ranging from Tankhammers to wreck vehicles in close combat to specially trained Bomb Squigs as a form of walking explosives.[1]