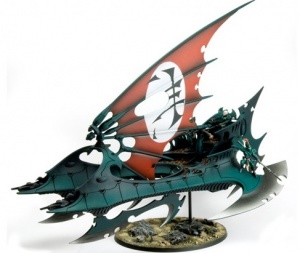 The Tantalus is an assault grav-tank of the Dark Eldar.[1]

First crafted for the Archon Surasis Grief of the Kabal of the Dark Mirror, the Dark Eldar Tantalus is an assault skimmer, somewhat larger and more complex in design than the Raider, and accordingly better armed. Its distinctive twin-hulled design houses powerful engine-reactors slaved to enhanced drives and its unique scythevane armament. One of the largest Dark Eldar vehicles yet encountered by the Imperium, the cruel reavers who pilot this sleek engine of destruction take delight in mounting high-speed attacks, slicing through the hulls of enemy vehicles and tearing infantry into crimson shreds, heralded by the screech of the molecular dissonance fields of its scythevanes and the rapid fire of its Pulse-Disintegrator armament.[1]

The Tantalus was once a unique craft, but after the death of Surasis Grief it was copied and sold to other Kabals.[2]