The Sentry Gun, more commonly referred to as a Tarantula,[1][5a] is an Imperial automated mobile weapon system[1] based upon ancient Imperial technology.[8] Useful in a variety of roles, it is most notably used by the Imperial Guard, but is also utilized by other groups including the Adeptus Astartes and the Adeptus Arbites. The exact origin for its nickname is unknown[1] also it is fair to assume that their multi-legged appearance can be attributed in part to this.[8]

It is said that some Veteran Guardsmen venerate this arcane devices that saved their life on more than one occasions. It is not unheard of for dedications to the sentry's gun machine spirit to be found reverentially placed around it. This practice is frowned upon by most Imperial commanders and Commissars have been known to issue severe penalties to anyone Guardsman caught participating in such acts of unsanctioned worship.[8]

The main Forge Worlds of Tarantula's origin are Lucius, M'khand, Voss and Metalica.[9]

The Tarantula is controlled by a simple logic engine and infused with "the machine spirit," which allows it to operate without a controller. However, due to limits in the logic engine's targeting capabilities, it must be pre-set to fire in one of three distinct modes prior to being deployed into battle. In point defense mode the Tarantula will fire at targets that enter its fixed firing arc, designed to cover a particular area of the battlefield. Sentry mode is meant for close defense of the Tarantula's immediate area, allowing it to traverse completely to engage targets though at a shorter range. When engaged in interceptor mode, the Tarantula engages enemy craft such as drop pods which attempt to land in the area.[5a]

Each Tarantula includes its own targeting auspex and on-board power cell,[5a] though it is possible to hook multiple sentry guns to a single power generator for prolonged use.[6] Once deployed the weapon system will continue to operate until it has run out of ammunition or it is destroyed and, unlike normal sentries, won't doze off or daydream while on duty.[1]

Many types of sentry guns exist, although the two most common variants are equipped either with twin Heavy Bolters for anti-infantry or twin Lascannons for anti-tank duty.[1]

The uses for these sentry guns are many and varied, from defending a perimeter from surprise attack to establishing a roadblock or operating as part of a static defensive line. However, their lack of inherit mobility restricts their use on a fluid battlefield. A Tarantula can be carried on the back of a Chimera, Rhino or by a Valkyrie in addition to their normal passenger compliment. Tarantulas can even be air-dropped via grav-chute and deployed from packing crates.[1] Drop Regiments such as the famous Elysian Drop Troops often use Sentry Guns equipped with grav-chutes dropped from Valkyrie airborne assault carriers to help form defensive perimeters around captured objectives,[3][4] especially when using them as part of a 'Castellan' Sentry Gun Defence Force.[5b]

Arbites sentry guns are often used for crowd control and riot suppression in addition to defending their precinct houses.[1] 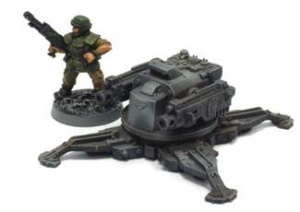 A Tarantula with a pair of heavy bolters 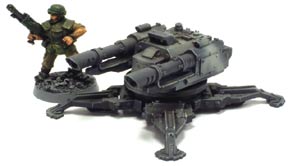 A Tarantula with a pair of lascannons

Many Chapters maintain a supply of Tarantula sentry guns which help alleviate some of the manpower concerns they face. Though they favor a highly-mobile form of warfare, Space Marines still find many uses for the Tarantula. This includes defending landing sites and extraction routes by providing a remote rearguard to delay any pursuing enemies. Space Marine Scouts have also used sentry guns to create an automated ambush, infiltrating into enemy territory to set up a disassembled camouflaged Tarantula and withdrawing to safety. Tarantulas can also be deployed from the backs of Land Raiders, Rhino and Razorback transports, as well as via grav-chute from Thunderhawk gunships.[2] Groups of sentry guns used to defend an area are often known as an Automated Defence Force.[5d]

These Tarantulas utilize the same technology found in the automated turrets of Razorback transports. More often than not they are created by salvaging the turret from a destroyed Razorback and converting it into a sentry gun, with the aid of a Techmarine reading the appropriate Rite of Salvage.[2]

Space Marines also make use of a unique Tarantula mounting a Hyperios missile launcher. These Hyperios Platforms are controlled by a central command platform and fielded in batteries of up to four platforms each. The command platform, though unarmed, is equipped with a logis-engine and scanning equipment to detect incoming aircraft. Once an enemy is within range, it relays the targeting information to the nearest launcher which activates, tracks the target and fires on it. A battery of these systems are often used to defend important strategic locations from air attack; although not as effective as a true Whirlwind Hyperios due to the limits of the logis-engine, they are sufficient for static defense.[2]