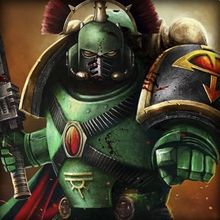 Tarik Torgaddon was the Captain of the Luna Wolves 2nd Company and a member of the elite Mournival, an informal council of four captains meant to advise the Legion's primarch, Horus.[1a] He was known as a joker but an extremely skilled warrior.[1b]

When Garviel Loken was elevated to the Mournival following the death of Hastur Sejanus Torgaddon befriended him, his light-hearted, jokerish nature tempering Loken's strict adherence to the rules. Torgaddon helped Loken settle into his new role as a Mournival member and advisor to Horus[1b] and was the one to introduce Loken to the Warrior Lodges, showing him that they were simply a way for Astartes of differing ranks and companies to come together as equals, which somewhat allayed Loken's suspicion of them.[1d]

When the 63rd Expedition responded to the distress call of Khitas Frome of the Blood Angels[1c] Torgaddon's company was chosen to descend to the surface of Murder and search for survivors. Once there he struck up a friendship with Emperor's Children Captain Saul Tarvitz but developed a dislike for the arrogant Lord Commander Eidolon, a feeling that became mutual after Torgaddon pulled rank, berated him for letting his lust for glory cause needless death, and telling him that Horus himself believed that Eidolon was an idiot.[1e] After contact was made with the Interex, Torgaddon continued to act as 2nd Company Captain and advisor to Horus.[1f]

When Horus was mortally wounded on the moon of Davin and people were crying out against the grief-driven killing of humans by Astartes, it was proposed by the Warrior Lodges to rid the fleet of these dissenting voices. Tarik refused to take part in this and quit the lodges over it. When it became apparent that the Legion's apothecaries could not save the dying Horus, Mournival and lodge members Ezekyle Abaddon and Horus Aximand proposed entrusting Horus to the Davinite priests, and move which both Torgaddon and Loken opposed, and for good reason, as it was the Chaos-worshipping Davinites who allowed Erebus to enter Horus's mind and sway him to Chaos. With Chaos's evil influence spreading throughout the 63rd expedition Torgaddon and Loken vowed to oppose it. When he and Loken discovered the Kinebrach blade used to injure Horus, they realized Erebus's treachery. When Tarik encountered Erebus, he held a knife to his throat.[Needs Citation]

During the Isstvan III incident, Torgaddon was one of the loyalists whom Horus deemed too loyal to the Emperor to rebel against him and hoped to purge through a fiendish virus bombardment. However, once the loyalists received word of the treachery from Saul Tarvitz of the Emperor's Children, Torgaddon was among those captains who led the resistance against the Traitor Legions during the Isstvan III ground war. [2] Towards the end of the grim battle, he and Garviel Loken received word that their former Mournival brothers Ezekyle Abaddon and Horus Aximand would be landing on the planet's surface to oversee the final elimination of the loyalists. Hoping to kill their betrayers and slow Horus' plans, they planned an ambush at the landing site, but Tarik met his death at the hands of the reluctant but resolute Aximand, while Loken looked on in horror. Tarik died physically on Isstvan III but his gene seed was removed and taken to Calth by Word Bearer Erebus. Erebus sacrificed his gene seed, along with gene seed from the Salamanders, Raven Guard, Iron Hands and even some from the Traitor Legions.[3]

Later in an arcane ritual, Erebus used the body of Tarik as a catalyst to create the Daemon known as Tormageddon. A strange by-product of this ritual summoning was that some fragment of Torgaddon's spirit remained sentient and free, and was able to communicate with his old friend Garviel Loken on Luna.[4]