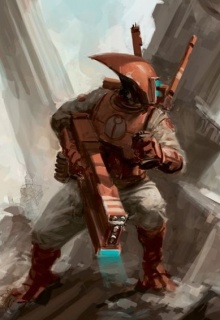 Pathfinder teams range far ahead of Hunter Cadres in search of enemy forces. They maintain a watch on the foe while remaining hidden, reporting details of the enemy’s nature and disposition by way of encrypted and undetectable communication systems.[1] Pathfinder teams are also deployed in the role of aggressive patrol groups, maintaining dominance over a wide area around a stationary Hunter Cadre and detecting any enemy forces that attempt to approach. Occasionally, an entire Hunter Cadre of Pathfinders is tasked with a mission, such as exploring a newly discovered planet and ascertaining if it is suitable for colonisation.[1]

Pathfinders are equipped with a range of specialised equipment to aid in their mission. Every member of the team wears Recon Armour and carries a Markerlight, a laser designator device attached to his firearm that projects an almost invisible, highly focused beam of light at a potential target. The Markerlight is networked to a support weapon platform such as a Hammerhead gunship, and transmits precise targeting information in order to guide the fire of such units. When used to guide the armour-piercing Seeker Missiles carried as additional weapons on many Tau tanks, the Pathfinders are able to remain hidden as they call in devastatingly powerful and unerringly accurate fire right onto the target. Many Imperial troops have come to fear the small, red dot of light that appears on the body of those about to be slain, and some refer to it as the "Valkyrie’s Mark."[1] Pathfinders are called to sacrifice themselves more often than their basic Fire Warrior counterparts, though recklessly wasting lives is always anathema to the Tau. However, during the early days of the Great War of Confederation, Pathfinder teams sustained casualty rates of 84% or higher. Despite this, or perhaps because of it, Fire Caste academies are overflowing with volunteers wishing to be Pathfinders.[5]

The Devilfish troop carriers used by Pathfinder teams are fitted with a larger variant of Markerlight technology called a Marker Beacon. This is used to designate a position to which jump troops and orbital insertion craft can be guided, allowing units such as battlesuit-equipped Crisis Teams to drop directly onto their target. Each individual Pathfinder is equipped with a Pulse Carbine, which is fitted with an underslung Photon grenade launcher. The grenades are used by the Pathfinders when they react to sudden and unanticipated contact with their enemies, and they are adept at rapid deployment using their anti-grav carriers. Some Pathfinders replace their carbines with Rail Rifles, sniper weapons as accurate and deadly as any similar weapon the Imperium is capable of fielding.[1] Others use experimental Ion Rifles.[4]

On several occasions, Pathfinder teams have held back while observing an infiltrating force, only calling in fire when their enemy is too far forward to extricate safely. When facing Tau forces likely to be accompanied by Pathfinder teams, the Deathwatch takes exceptional care to ensure mission security, equipping Kill-teams with all manner of sensor and countermeasure devices.[1]