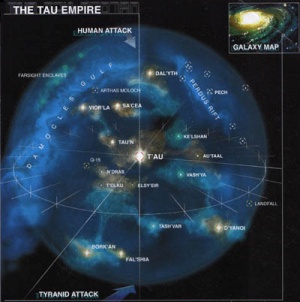 A Sept, also known as a realm, is a star system colonised by the T'au Empire; this includes all colonised planets, moons, and holdings such as orbital stations, and void structures within the system.[10a][10b] Each Sept is named after its Sept World, also known as Prime Planet or Capital Planet, from which the Sept is governed and is denoted by a different Sept Symbol and colour for each, often related to the unique culture of each Sept.[10b][11]

The Third Phase Expansion was convened on 977.997.M41 on the word of Aun'va.[1][2][3] Commander Shadowsun was placed in command, and secured at three new septs for the Tau Empire. During the Zeist Campaign of 999.M41, Space Marines forces counterattacked against the expanding Third Sphere, drawing the Third Sphere to a temporary halt. The three septs formed from the Third Sphere Expansion are:

After the ill-fated Fourth Sphere of Expansion reestablished contact with the Tau Empire after decades of being thought lost, a new campaign was immediately launched through a wormhole known as the Startide Nexus. Rapidly, worlds on the other side of the rifts have been colonized.

These are Septs that are not credited to a specific phase of expansion; some have been formed individually, through opportunity or a smaller-scale invasion. Some may not even be Septs, but rather a splinter of another Sept.

Besides the populous septs, there are also sparsely populated colonies. Only a few names are known. Locations of unstated status are put here as well.

During the First phase expansion, the homeworlds and colonies of the Kroot and the Vespid were also incorporated into the Tau empire. Notice that these star systems are not considered septs. In addition, there are an unknown number of former Imperial worlds in the Tau Empire, such as T'ros. Some or all of which might still have a Human population.