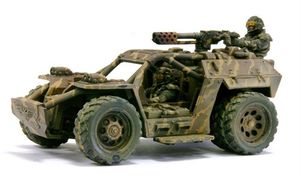 The Tauros Rapid Assault Vehicle is a sturdy all-terrain vehicle used mainly on the frontier worlds of the Imperium.[1] They used by the Explorators team and even various brigands and renegades.[5] Some have been adapted to serve in specialised Imperial Guard Regiments, notably the Elysian Drop Troops.[1]

The Tauros employed by the Elysian drop regiments are further adapted to be lightweight and thus deployable from a Valkyrie. The Standard Tauros is a 4x4 with either a dorsal mounted Heavy Flamer, or Tauros Grenade Launcher, manned by a gunner.[1][4] So the crew consist of a driver and a gunner.[5]

Elysian variant of the Tauros is lightweight and transported to the battle by Sky Talon Valkyries, which simply carried them with the magnetic clamps and released the Tauros with two-man crew already on board. The Tauros dropped last short distance and the heavy impact compensated by the reinforced shock absorbers of the vehicle. The Venators may be dropped just in the center of battle or contrarily - behind the enemy lines for reconnaissance or 'hit-and-run' attacks. For these missions the Tauros will be carrying the extra equipment: weapon power packs, camouflage netting and hunter-killer missiles as well as supplies and crew weaponry. This allows the Tauros squadrons continue the mission for a long time without the additional resupplying.[5]

All Tauros are equipped with Galvanic motor technology allowing them to press ahead even after taking damage to their traction.[1] Also thanks to them the vehicle do not gave the standard multi-fuel engine, which is both dirty and loud and often gives away vehicle's position. Galvanic motors on the other hand driven by electrical power so only hums softly.[5]

The Tauros Venator is a further modified version of the Tauros, the principle change being the replacement of the standard weapon mount with a twin-linked set of heavier weaponry such as Multi-Lasers. The increased energy reserves required to power the weapon requires the rear of the vehicle to be extended and an extra pair of wheels installed to maintain stability. These modifications prevent the Tauros Venator from being airlifted by a standard Valkyrie, instead relying on Sky Talon Valkyries, which are equipped to deal with heavy loads.[1][2]

The heavy weapons and high maneuverability of the Venator variant make it a favoured vehicle employed by the Elysians, who are often left without the heavy support needed to take on enemy armour after a grav-chute into enemy territory. They are also used in long-range scouting missions, as well as behind enemy lines where they are capable of operating for extended periods without resupply thanks to their galvanic systems.[2]

Venator is often includes a small, powered rear turret, where the twin-linked Multi-lasers are located, which draw power from the many auxiliary galvanic cells of the vehicle. The multi-lasers can be replaced by a pair of twin-linked Lascannons, with each squadron generally utilising one lascannon-armed anti-tank vehicle for every two with standard armament. The drop regiments also adapted the Venator with two hunter-killer missiles mounted on the additional hard points.[5]