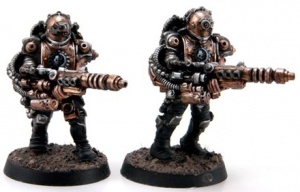 Adsecularis, also known as Tech-Thralls, are menial laborers used by the Adeptus Mechanicus.[1]

Despite the never ending back-breaking service to the Mechaniucs, they still try to have some semblance of society. Adsecularis have the same hopes and desires as Imperials on other worlds do and a rare few are even defiant against their fate. However their spirits are worn thin by the drudgery of their existence at the Mechanicus' hands. There are some Adsecularis who have become so mentally broken by their life, that they become mute and numb to the world. Those that do so, will then be obediently compliant to whatever authority figure gives them orders, even if they are not given by the Mechanicus[4]. Considered a lower order than most Servitors, the ultimate fate of most Adsecularis is to end their lives recycled into Servitor components and their Augmetic implants harvested for further use.[1]

When a need arises for expendable servants or troops, however, the Adsecularis are deployed by the Mechanicus. Those selected are often captured prisoners or criminals and they are given basic Augmetics and cranial surgery in the process. When deployed in combat, Adsecularis are armed with a variety of light weapons such as Shotguns, Chainblades, Las-Locks[1] and Mitralocks.[3]

The Adsecularis are also sent to assist Tech-Priests in repairing Imperial Titans, though, they go by different names. In Legio Metalica, they are known as the Duluz and they wear uniformly off-white clothing, to signify their allegiance to the Forge World Metalica. They are composed of several sub-factions, which includes the Tributai who make up most of the Duluz. The Tributai are either natives of the Forge World's various vassal systems, who were given as tribute to Metalica, or they were collected in the Legio's various campaigns. The Tributai wear a mixture of tabards, half-robes, kilts and coveralls depending on their station and expertise. Many also have crude Augmetics, which have either been gifted to them by a patron Tech-Priest or made in a basic workshop within the Titan they reside in[5a]. Despite being the majority, however, native born Metalicans, known as the Epilekhtoz, are at the top of the Duluz's hierarchy. They wear white robes edged with red and use their position to lord over the Tributai. The Epilekhtoz are quick to yell at the Tributai for some real or imagined laxity in their duties. However the Tributai accept this, as the Duluz' hierarchy considers the native born Metalicans to be superior to them.[5b]

The Duluz's third faction are the red-lined cloaked Hyperezia, who act as Legio Metalica's Enforcers aboard the Titans. They answer to their Titan's Princep, Moderatus and Tech-Priests, and maintain order within the Duluz. The Hyperezia are used to discipline or kill, disobedient Duluz[5a] and also hunt down any who have been declared Heretics[5c]. However the Duluz are also watched over by their Titan's Skitarii and an unwritten covenant exists between them. The Skitarii protect the Duluz and in return the Duluz maintain the Titan, they all lived within.[5d]