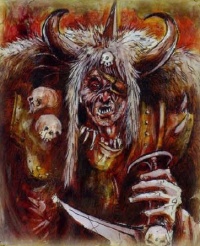 Techno-barbarians is the name given to the warriors who battled over the ruins of Terra during the Age of Strife. They formed the troops of the warlords who dominated Terra during the period, and were equipped with a primitive form of powered armor which would become the basis for the developments of Space Marine armor.[1]

The Emperor arose in the later part of the Age of Strife to reunify Terra. Under his leadership his army conquered the other warring techno-barbarian factions.[1]