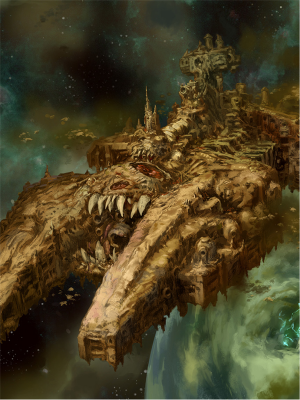 The Terminus Est, flagship of Typhus the Traveller[2]

The Terminus Est is the flagship of Typhus, Herald of Nurgle.[2]

Built on the shipyards of Luna by Mechanicum artistans,[2] the Terminus Est was one of the first capital ships assigned to the Death Guard by the Emperor. It was of a unique design that pre-dated the Great Crusade and which was copied in M36 as part of the Gareox Prerogative to create the Despoiler class. As might be expected the older vessel was considerably more powerful than the later copy, although nothing definite is now known of the pre-Heresy configuration of Terminus Est. It is said that the Terminus Est was capable of challenging a Gloriana Class Battleship.[3]

References exist that suggest it was originally primarily employed as a planetary assault ship. This is not unusual as it conforms with the role assigned to the vessels of the Space Marine Legions. Many of the vessels used in the Great Crusade were, however, handicapped by system failures that the Imperium lacked the ability to repair. Often this would result in many systems being replaced with less efficient but more easily maintained alternatives.[Needs Citation]

The role of Terminus Est during the Horus Heresy is better known. At Isstvan the Terminus Est engaged and destroyed the Shadow of the Emperor, the flagship of the Raven Guard. It is argued that this engagement was the earliest recorded conflict between battleships specialised to carry attack craft. The engagement was swift and deprived the embattled loyalist forces of any air support in the massacre that followed. The vessel led Typhon's fleet during the Battle of Perditus and subsequent campaigns.[Needs Citation]

The Terminus Est and Typhon reappeared on Ynyx and upon the First Captain's request Mortarion himself agreed to journey on the vessel to Terra instead of the Endurance. However this was part of Typhon's elaborate plot to corrupt the Death Guard, and in the subsequent trap within the Warp the Terminus Est along with the rest of the Death Guard fleet became daemonically corrupted.[3] When the Terminus Est was sighted as part of the armada that followed Horus to Terra it had changed. The Mark of Nurgle was upon it and all the other vessels of the Death Guard. While Mortarion led the assault on the Lion's Gate starport, Typhus controlled the Plaguefleet and it is suspected actually began the orbital bombardment of the Emperor’s Palace.[Needs Citation] During the Siege of Terra, the Terminus Est took part in the destruction of the Emperor's flagship Imperator Somnium.[4]

Following Horus’ death and the arrival of loyalist reinforcements the Terminus Est’s formidable reserves of attack craft were expended as a rearguard while the Death Guard were evacuated back to their ships. Along with the rest of the Traitor Legions the Death Guard fled to the Eye of Terror and disappeared from Human knowledge for centuries.[2]

In the Eye it is suspected that the Traitor Legions fought amongst themselves. It is the boast of the Death Guard that their Primarch-turned-Daemon Prince Mortarion conquered a mighty empire within the Eye and transformed it to his own tastes. Typhus and the Terminus Est were among the first of the Death Guard to be sighted again when they brought plague to the Agripinaa System in M35. The success of the Terminus Est in defeating the battlegroups sent against it had a major effect on the thinking of the Imperial Navy. In M36 an Adeptus Mechanicus expeditionary force succeeded in finding schematics of its design on the perdita world of Barbarus and began building the Despoiler class.[2]

Little were they to know that the core architecture and design of the class’ warp shields hid a fundamental flaw. Only when in the following centuries the vessels of this class were either lost in the Warp or turned renegade did the realisation strike home. The Terminus Est and Typhus did not assume a central role in the Gothic War. A single sighting near Anvil 206 was the only evidence of their presence. However, considering the later incidents traced back to Anvil 206 it is clear that a particular mission was accomplished.[2]

Terminus Est bombarded the orbital defense of holy planet Annunciation before Typhus descended on the planet and personally desecrated it by himself.[1]

In M41 the Terminus Est is one of the oldest ships known to the Imperium, the power of Nurgle holding its ancient hull together while the most virulent plagues seethe through its dank corridors. The Terminus Est is a part of Nurgle’s realm given license to travel the stars, spreading death at the behest of its damned captain. There will be no rest for the Imperial Navy until it is finally hunted down and cleansed forever.[2]

The Terminus Est is surrounded by vast swarming clouds of the same Warp-spawned flies which buzz and howl through its interior, and which first transformed Typhus into the Host of the Destroyer Hive. This miasma permeates outwards from the ship, through blisters, boils and fractures in its surface or through corroded, useless discharge tubes and weapon barrels.[2]

This miasma replaces the ship’s turrets, and works in exactly the same way as turrets against attack craft, but has no effect against torpedoes. The miasma is so thick that it obscures and distorts the shape of the Terminus Est.[2]

Along either side of the Terminus Est, row upon row of festering pustules, hives, boils and sores erupt outwards from the ship’s cankered skin. These growths cover the rusted remains of what was presumably once the ship’s main broadside batteries, growing in a diseased parody of these weapons like coral over rock. They seep and bloat, periodically erupting violently and hurling a mixture of corroded debris, ammunition and filth out into space.[2]

Terminus Est is a Latin phrase meaning "this is the end".