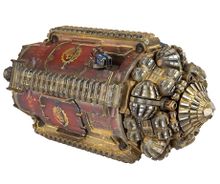 The Termite is an Imperial and Squat tunneling transport vehicle.[1]

The Termite was originally developed on Terra for rooting out burrowing Xenos during the Great Crusade.[5]

Launched from a mobile surface transporter,[3a] the Termite is used to transport troops through the earth, safely hidden from incoming enemy fire. In addition to providing greater protection for its passengers, the Termite's tunneling ability, which operates via an array of Melta cutters and phase-shield generators,[4] means they are often used for launching surprise attacks, appearing behind enemy lines and causing chaos amongst their unsuspecting foes.[3b] The entire First Company of the Imperial Fists were deployed in this fashion on Abfall B, assaulting the traitors' stronghold directly and playing a decisive part in bringing the planet under Imperial control.[3b]

The Termite has a transport capacity of around ten individuals and is often armed with heavy weapons such as Lascannons, Heavy Flamers, Volkite Chargers,[4] and Heavy Bolters which it can fire as it breaches the surface.[3b] Once a Termite has surfaced and dispatched its payload it is essentially immobilized.[3b] The Termite's surface transport vehicle is unarmed.[3a] 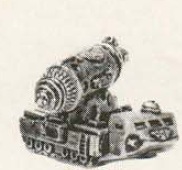