The Terran Crusade was an Imperial Crusade fought shortly after the Thirteenth Black Crusade and the destruction of Cadia. It saw the resurrected Primarch Roboute Guilliman leave Ultramar on a pilgrimage to Terra. 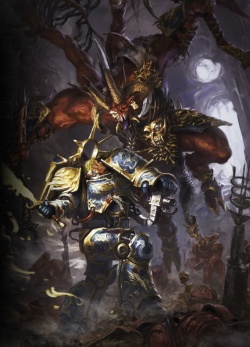 During the Ultramar Campaign, Belisarius Cawl and his Eldar allies managed to revive the wounded Ultramarines Primarch Roboute Guilliman as Ultramar was besieged by Abaddon the Despoiler's Chaos Space Marine forces. After driving out the Chaos invaders, Guilliman immediately ordered a war council and a debriefing on the situation. Disgusted by what he heard regarding the state of the Imperium, Guilliman entered his private chambers for four days along with Marneus Calgar, Tigurius, Voldus, Saint Celestine, Greyfax, and Belisarius Cawl. When he emerged, he declared his plan to reach Terra and manage the situation from there. After a massive parade on Macragge to unveil the reborn Primarch, Guilliman and his forces left on the Macragge's Honour for Terra. Soon enough, word of the Primarch's revival had spread throughout Ultima Segmentum and reinforcements from the Raven Guard, Space Wolves, White Scars, Dark Angels and other Chapters such as the Mortificators and Novamarines[2] arrived to bolster Guilliman. These are later joined by fresh Imperial Guard and Imperial Navy, Mechanicus forces, Sisters of Battle, Knight Houses, and Titan Legions. Soon enough, Guilliman had a massive army for his journey to Terra.[1a]

However, the rebirth of the Primarch drew the attention of the Chaos Gods, and the entire Warp was flung into disarray. The Great Game escalated in the Warp as hysterical Daemonic armies moved on their patron Gods' realms in renewed attacks. The collective result from these disturbances were a series of massive Warp Storms across the Galaxy on a scale not seen since the Age of Strife. Guilliman's journey to Terra was thus far more difficult than originally expected. The Dark Gods were not the only ones to sense his revival; Mortarion and Magnus both felt the resurrection of their brother and begin to plan for the future as well. Fulgrim possessed the Arch-Consul of Macragge and goaded the brother he had previously wounded 10,000 years ago.[1a]

For the next seven months, Guilliman moved through Ultima Segmentum and reclaimed worlds under Chaos assault. The surviving Chaos invaders from the Ultramar Campaign had set their sights on these defenseless worlds. Even worse is the spread of a new blindness-inducing disease that decimated Imperial warriors and civilians alike. It soon became clear that this plague is the product of Mortarion, who has summoned the powers of Nurgle in its creation. However, the mere presence of Guilliman is able to cure the afflicted, and the Primarch is forced to suspend his trip to Terra to journey across diseased planets and cure their populations. Guilliman's miracles caused further religious hysteria around his return. The Primarch speculated that this was a deliberate plan by the Gods of Chaos to delay his return to Terra.[1b]

With the Warp in turmoil, Guilliman's fleet could only make short inaccurate jumps, and the journey took far longer than it otherwise would have. When the fleet arrived at the edge of the Maelstrom, they found themselves under a massive Thousand Sons ambush led by Magnus the Red himself. At its center was a colossal craft bearing the great pyramid of Tizca. Magnus had no desire to slay his brother yet, and instead conducted a psychic ritual that pulled the Imperial ships into the Maelstrom. Many of the vessels were destroyed during the ritual as they did not have time to raise their Gellar Fields. Once inside the Maelstrom, Guilliman's fleet came under a large scale Red Corsairs attack. The Imperials were able to defeat the Red Corsairs, but one of the surviving corsair Marines became possessed by Kairos Fateweaver, who declared that Guilliman will wander the Maelstrom forever.[1b]

For a time, the Imperials did indeed wander the Maelstrom aimlessly. Time is inconsistent in the Maelstrom and it was not clear how long they are trapped here. To make matters worse, ambushes by Chaos Space Marines and Tzeentch Daemons took their toll on Guilliman's pilgrimage. Guided by the visions of a mysterious Eldar, the Imperials are eventually able to traverse the Maelstrom and arrive at a navigational point, finding a vast graveyard of ships linked together in a web of chains. This web stretched endlessly in all directions, trapping the Imperials. It is here that the Red Corsairs launched another ambush.[1b]

The Red Corsairs launched a boarding operation of the Macragge's Honour and moved towards the bridge. These attackers were accompanied by Daemons of Tzeentch and Fateweaver himself. Quickly reaching the bridge, Guilliman and Fateweaver began to duel one another. The Lord of Change revealed that he has been implanting subtle doubt into the mind of Guilliman since he entered the Maelstrom, and now used that doubt as a ritualistic catalyst to finish him. Guilliman was forced to his knees by the negative emotion and became trapped in psychic crystal chains. Fateweaver ordered the Imperials to surrender themselves lest he execute their Primarch. Faced with no other option, the Imperials surrendered and were taken captive. Those that refused were forcibly taken or killed.[1b] 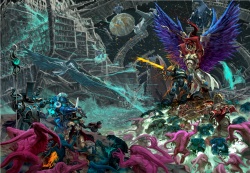 Guilliman and Magnus duel on Luna

The Imperial captives were moved to a Blackstone Fortress that Abaddon had gifted to Huron Blackheart. Fateweaver refused to kill his prisoners, instead wishing to find some use for them in the future. This did not sit well with all the Chaos forces, and Skarbrand and his Khornate legions assailed the Fortress in search of the heads of Guilliman and his men. A massive battle erupted between the forces of Tzeentch and Khorne within the Blackstone Fortress.[1c]

Using this distraction to their advantage, an unseen force quietly slipped into the Blackstone Fortress and was able to free the Imperials from their cells. Revealing themselves as Fallen Angels led by Cypher himself, the freed Imperials had no choice but to trust this new ally. Cypher's Fallen were accompanied by Sylandri Veilwalker, who is revealed to be the source of the visions that had guided Guilliman in the Maelstrom. Reinvigorated, the freed Imperials went on to liberate the rest of their number throughout the Blackstone Fortress. They were also able to reacquire their ships and tanks that had been taken by the Red Corsairs. The Imperials took up these vehicles and made their way for the same Webway Portal that Cypher and Veilwalker had arrived through. The fleeing prisoners came under massive Daemonic assault as the forces of Khorne and Tzeentch temporarily put aside their battle in the face of new prey, but the arrival of the Legion of the Damned turned the tide.[1c]

The Battle of Luna

Inside the Webway, the Imperials and their Eldar allies came under renewed Chaos Assault, this time from Magnus' Thousand Sons, who had foreseen their escape. Guilliman deduced that Magnus wanted the Eldar to open up the Webway Gate to Terra in order to allow his Thousand Sons to exploit the breach and invade the planet. Not wishing to play along with Magnus' scheme, Guilliman and Veilwalker instead moved for the Webway Portal to Luna. Despite being hounded by the Thousand Sons at every turn, the Imperials and Eldar eventually reached the portal to Luna.[1c]

On the other side of the Portal, Guilliman and the others arrived in the craters on Luna's surface. However, before Veilwalker could seal the gate, the Thousand Sons burst through, this time accompanied by Magnus himself. A vicious battle erupted as the Imperials and Eldar attempt to stop Magnus from capturing Terra's moon. Brothers once more engaged in a fateful duel as Guilliman battled Magnus. The Daemon Primarch's psychic powers overwhelmed Guilliman, but, before he could be defeated, Battlefleet Solar, Imperial Fists, Sisters of Silence, and the Adeptus Custodes arrived from Terra. The Thousand Sons were being pushed back, and the null-field created by the Silent Sisters negated some of Magnus' powers. This allowed Guilliman to drive his sword through the Daemon Primarch's back. Magnus was forced back through the Webway Portal as Veilwalker closed the gate. With the gate closed, the rest of the Thousand Sons, as well as the Eldar, simply vanished.[1c]

With the battle over, Guilliman and his forces landed at the Imperial Palace. The Primarch confronted Shield-Captain Adronitus and demanded entry past the Eternity Gate so he could confer with the Emperor himself. Hesitantly, Adronitus agreed, on the condition that Guilliman enter the chamber alone. As Guilliman entered the Emperor's throne room, the Custodes arrested Cypher and his Fallen.[1c]

A day later, Guilliman stepped out from the Eternity Gate. What transpired before the Golden Throne is not known. However, he gathered all of the High Lords of Terra and declared himself the new Lord Commander of the Imperium. The Primarch stated that dark days are ahead, and that he would reorganize the Imperium and its fighting forces in order to confront it and ensure humanity's survival.[1c]