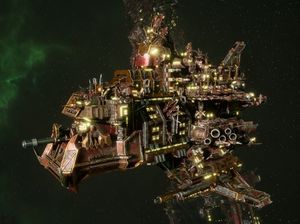 Terror Ships are a variant of the typical Ork Kill Kroozer.

Generally built from salvaged hulks like their cousins, Terror Ships forgo some of the usual broadside Heavy gunz in favor of simply chopping large sections out of the hull to use as launch bays for Attack Craft.[1]

Primarily associated with raids in the Cyclops Cluster, a good example of Terror Ships in action was an attack on a small resupply base at Mirrobel. There, two Terror Ships and a half-dozen Escorts appeared, with the Terror Ships promptly launching Assault boats to attack the garrison. The arrival of the Dauntless Light Cruisers Abdiel and Uziel and a squadron of Firestorm Frigates was not enough to stop the attack, as even with their Attack Craft already engaged, the Orks still had enough firepower to drive off Mirrobel's would-be saviors.[1]