Terror Squads were specialized Night Lords infantry formations during the Great Crusade and Horus Heresy. Their symbol was a bloody hand.[3]

When punishments against those defying the Emperor was judged to be most severe, Terror Squads were unleashed. Consisting of torturers, flayers, mutilators, and head hunters, they were the coldest and most dispassionate members of the Legion. As the decades progressed Terror Squads became a sink-hole for the most unstable and unsubtle members of the Night Lords, and many were already facing death sentences that had been commuted so long as they proved useful to Konrad Curze.[1]

During the Heresy, Terror Squads were led by Headsmen.[2] 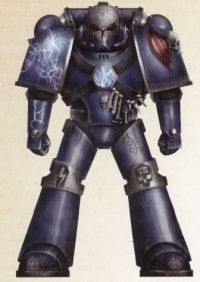