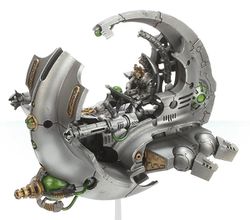 The Tesseract Ark is a Necron war machine.[1]

One of the most powerful Necron engines encountered in M41, it is a highly sophisticated design produced only by skilled Crypteks. It is built around a contained singularity torn from the heart of a dying star, and in battle it siphons energy from this source to unleash devastating firepower from its Tesseract Singularity Chamber. The Ark itself is surrounded by a gravitational distortion field, which is both its method of movement as well as a defense mechanism.[1] In addition to its Singularity Chamber, a Tesseract Ark is also armed with either two Tesla Cannons, Gauss Cannons, or Particle Beamers and is protected by Quantum Shielding.[2]