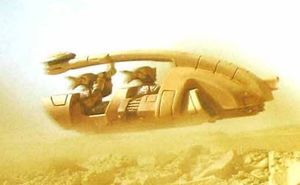 The Tetra is a light anti-grav reconnaissance vehicle used by the Tau Empire. Operated by a two-man Pathfinder Team, it is not a true combat vehicle, instead designed for long-range patrols and infiltration missions.[1]

The Tetra was first identified during the Taros Campaign, one of a number of vehicles which were first fielded during that operation, where they typically operated in pairs. Ranging far ahead of their parent Hunter Cadre, Pathfinder squads would use Tetras to get into a favourable position before dismounting and continuing on foot. When their mission was complete, the Pathfinders would return to their Tetras, which were hidden from sight, and return to friendly forces with the gathered intelligence.[1]

The Tetra makes use of similar anti-gravity generators used in other Tau Vehicles, allowing it to skim over the planet's surface at high speeds. It is equipped with a Disruption Pod, distorting the vehicle's image in both the visual and magnetic spectra, to facilitate its use for surveillance, sabotage and ambush missions. It is also packed with advanced communications and surveillance equipment, including a Markerlight system for accurately directing Seeker Missile fire.[1]

In addition, the Tetra can be upgraded with a Blacksun Filter, Decoy Launcher, Sensor Spines, Targeting Array and Target Lock system.[1] 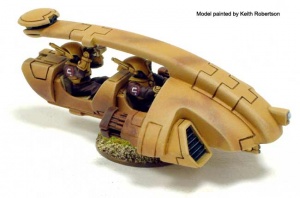