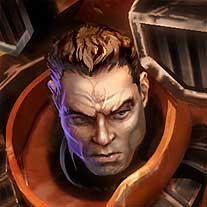 Thaddeus is an Assault Marine Sergeant in the Blood Ravens 4th Company[2], having been promoted shortly before the Tyranid invasion of Subsector Aurelia.

Thaddeus grew up a native of the Hive World Meridian, in Hab Spire Legis. He became the leader of an under city gang, and was involved in one of the world's many riots. During one of these disturbances, Davian Thule noticed the young boy holding off rioters. Inspired, the Captain put Thaddeus forward for the Blood Raven trials, the first Meridian native to be accepted in 700 years. 80 years later, battle-brother Thaddeus became a Sergeant before even earning his first service stud. He has since earned a reputation as a brash and idealistic brawler; and made his name battling Feral Orks on Calderis and Typhon Primaris.[1]

Thaddeus is armed with a MK X "Hells Teeth" Chainsword and an Astartes Mk III Bolt Pistol at the beginning of the Campaign. As the campaign advances, pending the players choices he can be made to wield various Power Weapons. Thaddeus can also be upgraded with Terminator Honors which allows him to wear Terminator Armour and he and his squad can be turned into a Terminator Assault Squad which come equipped with Thunder Hammers and Storm Shields.[1]

In Warhammer 40,000: Dawn of War II - Chaos Rising he can wield a Lightning Claw, or a pair of same in Terminator Armour.[2]