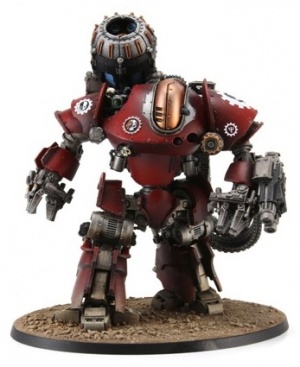 The Thanatar Class Siege-Automata is a type of battle robot used by the Legio Cybernetica of the Adeptus Mechanicus.

This automata is designed as a mobile artillery platform armed with a Hellex Plasma Mortar or Sollex-pattern heavy Lascannon as well as a Graviton Ram and twin-linked Mauler Bolt Cannon. The Thanatar's frame, built to accommodate the huge weapon and its power system, is considerably larger than even the bulking Castellax. Its frame is also heavily reinforced, both to withstand the recoil of firing its weapons and protect it from incoming attacks. Its armor makes it essentially impervious to small arms attacks no matter how advanced.[1] Due to the enormous power required to power its colossal weapons, the Thanatar was considerably larger than other Battle-Automata.[3]

Unlike many of the models produced for the Legio Cybernetica, the origins of the Thanatar pattern robot remain unclear. Save that its Hellex Plasma Mortar is only produced on the Forge World of Ryza.[1] 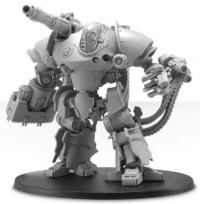 The Thanatar-Cynis Class was a variant of the standard Thanatar-Calix class designed by the Forge World of Estaban III with an attempt to increase their power and standing within the greater Mechanicum. However due to their competition with Ryza, Estaban III was unable to acquire their plasma technology, resulting in the Cynis pattern of Thanatar being more prone to self-destruction despite the power of its Cynis Pattern Plasma Ejector.[2]

The Thanatar-Calix Class was a variant of the standard Thanatar design developed during the later part of the Great Crusade. Rumored to have been developed by the Sollex Myrmidon and Omega-Shevar covenants of the Ordo Reductor alongside the Legio Cybernetica, this design combines deadly tech-arcana from all three factions into a single deadly weapon. Calix Class Thanatar's are geared towards the vanguard of siege assault warfare, able to sunder the strongest fortifications and conduct targeted strikes to neutralize defensive hardpoints. Its primary weapon was its Sollex Heavy Lascannon, and so precious were these engines that in the rare cases they were deployed many other lesser battle-automata were fielded to protect them. Additional weaponry included a twin-linked Mauler Bolt Cannon and Graviton Ram.[3]