The Cleaved are a warband of Chaos Space Marines. Oil-like blood constantly oozes from the joints in their power armour. These marines are known to have a high threshold for pain.[1]

The Battle cry of the Cleaved is said to be 'CALL WITH ALL YOUR SOUL, LITTLE ONE. CALL AND WE SHALL ANSWER'.[5b]

First appearing during the insurrection of the Magma Cordelian, the loyalist Guardsmen of the Iridian 334th Regiment had pushed their way into the rebellious Planetary Governor's palace after. However the unit's regiment of Primaris Psykers realized that the architecture of the palace was actually a gigantic summoning circle. Into the fray were summoned the Cleaved, who massacred the Iridian guardsmen and secured the planet for the traitors.[2]

In 891.M39, the Cleaved appeared out of a newly materialized Space Hulk. Battling the Dark Angels, the loyalist Astartes emerged victorious when their Assault Squads, emerging behind a trio of Dreadnoughts, got close enough to set Cyclonic charges to the space hulks engine room.[3]

Sometime after the formation of the Great Rift, The Cleaved fought raided the Iron Hands homeworld of Medusa alongside forces from the Death Guard and Purge.[4a] They have also taken part in the Charadon Campaign.[6] 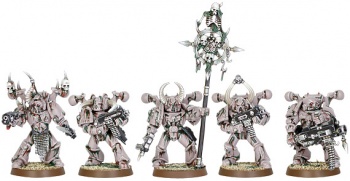 A squad of The Cleaved