In the lawless underhive of Necromunda, none are more feared than the bounty hunters, vicious individuals who track and capture anyone who has displeased the guilders. And no bounty hunter is better known than Kal Jerico. With his sidekick Scabbs and psychotic killer Yolanda in tow, Kal is never far from danger. Whether it’s recovering a priceless artefact for Lord Helmawr, the ruler of Necromunda (Blood Royal), surviving a holy war waged by the religious fanatics of the Crusade of the Red Redemption (Cardinal Crimson) or trying to prevent himself being married off (Lasgun Wedding), Kal is always quick to find trouble, and even quicker to fight his way out of it.

This omnibus edition contains the novels Blood Royal, Cardinal Crimson, Lasgun Wedding and the complete Kal Jerico comic series, including Above and Beyond, reprinted for the very first time since its original appearance in the pages of Warhammer Monthly. 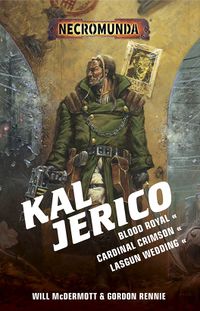