The Damnation of Pythos (Novel) 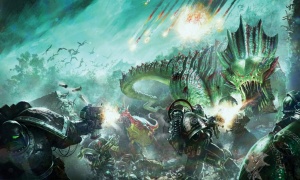 The Damnation of Pythos by David Annandale is the 30th novel in the Horus Heresy series. It was released in July 2014.[1] It was later included in "The Novels: Volume 6" eBook collection.

In the aftermath of the Dropsite Massacre at Isstvan V, a battered and bloodied force of Iron Hands, Raven Guard and Salamanders regroups on a seemingly insignificant Death world. Fending off attacks from all manner of monstrous creatures, the fractious allies find hope in the form of human refugees fleeing from the growing war, and cast adrift upon the tides of the Warp. But even as the Space Marines carve out a sanctuary for them in the jungles of Pythos, a darkness gathers that threatens to consume them all...[2]