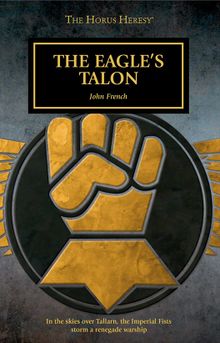 The Eagle's Talon is an audio drama in the Horus Heresy series by John French. It was released in January 2015, and published in print for the "Summer of Reading 2015: Week 1 Collection" and on its own in August 2015. The run time is 39 minutes, and it is performed by Annie Aldington, Sean Barrett, Luke Thompson and Saul Reichlin. It was also included in the anthology Eye of Terra.

Taking place during the Battle of Tallarn, the story reveals the actions of 3 Imperial Fists recon squads sent to prevent the landing of the macro-transporter Eagle's Talon to the surface of Tallarn, which would have a dramatic effect on a massive battle for the southern continent. The story is told over a series of 7 vox transmissions that were captured during the infiltration of the ship.

The ravaged world of Tallarn now plays host to the greatest armoured conflict in the history of mankind, with the bitter and vengeful Iron Warriors leading warhosts of tanks and Titans across the befouled plains. In desperation, a covert team of Imperial Fists resort to seemingly unthinkable measures in order to regain the upper hand - but will their mission to seize the macro-transporter Eagle's Talon ensure victory, or merely spell doom for their loyal allies on the surface below?[2]

A servitor states that it will test for recording clarity the vox capture from aboard the Eagle's Talon. An audio recording begins with a conversation between three members of the Imperial Fists, commander Gamus, Theophon, and Arcad. Theophon states that his choke point is being breached and that the auto defenses have returned. Gamus detonates the prime arterial coordidor, which Theophon states would provide him with 100 to 150 seconds before the enemy can find a work around. Gamus tries to contact Arcad about the mission to take the atmosphere control but he is unable to get a clear signal. Theophon breaks in to say that he can't hold his position, the choke point is being overrun, and there is no other choice but they have to act now.[1]

The vox record cuts off as the servitor states that will now access the full records designated Eagle's Talon for notation. An Iron Warrior's voice then cuts in, saying that the macro-transporter hit the surface of Tallarn 197 days, 10 hours, and 17 minutes since the start of the battle. In his consideration, the crash affected the battle in a major way, but the actual role of the effect would be difficult to determine. Initially, it was thought to be caused by either Imperial ships able to bring it down or that the ship suffered from an internal failure. Instead, vox communications captured revealed that the Imperial Fists were operating a strike force consisting of 3 squads (Command Squad Gamus, Theophon and Arcad). They were lightly equipped and in recon configuration.[1]

The servitor then plays vox fragment 1: Theophon states that he is at waypoint 1 and that there was no resistance. Although he wants to move forward, Gamus orders him to stay. Theophon mentions that the structure of the ship did not match their plans, but Gamus ignores him and orders Arcad to move to waypoint 2. Arcad reflects on the vastness of the ship, but Gamus points out that it is in the top displacement class but not unique, chastising Arcad. Theophon states that he is able to reach the power conduit through a hatch (secondary objective gamma), and he is ordered to set charges instead of moving onto the primary target. The Iron Warrior cuts in to state that the infiltration occurred simultaneously with an unnamed battle that was taking place on the southern continent between Titans and Knights, the largest battle of the conflict. The battle was so important that the victor would have been able to win the whole war, and that the Eagle's Talon was intended to provide reinforcements for the Iron Warriors.[1]

Vox fragment 2 begins with Theophon at the secondary objective and he expresses his misgivings: if the mission fails, the destruction of the conduit would cause the ship to crash, and would that then cause the war to be lost or will life move on without care. Gamus responds that every battle is significant and that they can only fight. Theophon questions what would happen to their allies if the ship crashes, and Gamus states that most of the Imperials are hidden beneath the surface. Theophon points out that the poison air could be forced into the bases, and the two dispute the costs of war. Then Theophon sets the explosives. The Iron Warrior reflects on the difficulty of taking a ship, and that boarding missions are deemed zone mortalis, "ground of death." Commonly, boarders would seek to take out either the primary or secondary bridge, but the command tends to be the most heavily guarded so either slow and specialized troops or a fast elite force is traditionally used. Infiltration of a ship is rare, and that the Imperial Fists behavior either suggests they lacked such forces or that they had an imagination they did not believe the Imperial Fists had. Such assumptions would lead to problems.[1]

The 3rd vox fragment has Arcad stating that there is a problem in the rear spinal levels because the layout is different, and his only option is to use the vents. The enemy forces are substantial in the area and at battle readiness, making it difficult. His position was above 6-7-gamma-2, a sub arterial passage leading to the primary objective, but the enemy forces make it impossible to make a route. Gamus asks if there is any way around and he is told there is not. The troops and mechanicum forces, including [[Legio Cybernetica|cybernetic maniples}} are blocking the way, and Theophon says that destroying the main hoist conveyor could provide a distraction. Arcad points out that it would still be risky because he would have to kill two guards stationed below them. However, he says that he could still do it. The Iron Warrior cuts in with a reflection on honor and that it is a weakness during the Horus Heresy. During the Great Crusade, however, honor helped bond warriors together, but now it is just there to be exploited. What happened next, however, is why honor needs to be discarded.[1]

The servitor begins vox fragment 4, and Theophon worries about Arcad's mention of honor. Gamus chastises Theophon for using the vox in such a manner, but Theophon says that his age gives him the right. The two then debate the nature of those born during the Horus Heresy and how it will affect them, and Theophon mentions how good it was that someone like Arcad can still think of honor. Gamus replies that there is no room for honor, only necessity, and that they fight in silence because the primarch requires them to do so. Gamus then says that such a mission should only be for the old who are ready to die because the chance for success is slim and survival lower; there will be no one to carry their name back to their legion, and they have no clue what the future will hold. The Iron Warrior reflects that the operation intended to destroy an essential command system, such as the communication trunk that sends orders throughout the ship. To cut it would be like cutting the nerves, and it required a high degree of precision, but such actions are riskier and more prone to failure.[1]

As vox fragment 5 begins, Gamus is in position and detonates the charges, causing the shaft to collapse and alerts to sound through the nearby decks. Arcad's squad executes the attack but are immediately set upon by the automatons, which then send the ship into full alert and the blast doors start to seal. Arcad is pinned down, and Theophon is kept from closing the choke point to cut off reinforcements to the area. Arcad is ordered to the primary, but auto turrets are in their way. Gamus announces that he would hit the controls for the turrets. The Iron Warrior describes that covert operations only have the advantage of surprise and confusion, and that one individual can make themselves to appear to be far more. Infiltration requires planning, and that the three squads were spread in multiple decks: Arcad was near the objective, Gamus was in the machine spaces above, and Theophon was ready to cut reinforcements.[1]

Vox fragment 6 picks up with Gamus detonating the automated defense controls, and Arcad is ordered forward. Arcad is soon wounded on his left arm, and he announces that he is down to 2 members of his squad. Theophon is ordered to close the choke point to provide Arcad with room, but enemies are closing in from all directions. The Iron Warrior states that the probability of the mission succeeding without loss of all forces was 0.0. However, such losses were what the legionaries were made for, and their desire was for success and not survival.[1]

Time elapse from previous record is 24 seconds as vox fragment 7 begins, and the audio is the same as part of the tested fragment. The choke point is breached, auto defenses come back on line, and Gamus is forced to destroy the main arterial corridor. Gamus tries to contact Arcad but cannot reach him, which Theophon says that he is gone. Theophon continues to say that he is being overwhelmed and that Gamus has to detonate the charges. Gamus refuses, saying that he is a son of Rogal Dorn and cannot act in that manner. Theophon argues with him, saying that they will die in failure if they do not set the charges, and Gamus reflects that it might be how they should die as not to betray who they are. However, Theophon points out that he did not actually turn the ability to detonate the charges to Gamus because of his earlier misgivings, but is now convinced that the ship has to be destroyed. Before blowing the ship, Theophon tells Gamus that it was not betrayal but a sacrifice.[1]

The Iron Warrior ends the analysis by stating that the ship's destruction caused a blast over 300km, with winds over 100km an hour. The battle was immediately ended, and that such an event would have doomed any other planet but the already dead Tallarn. The consequences of the event are difficult to judge, but it is enough to know that the incident took place because it could repeat again within the Imperial Fist. This was vital intelligence, but it should be for Perturabo only, of which the analysis was created. The Iron Warrior ends the recording then orders a purge of all records designated Eagle's Talon.[1]