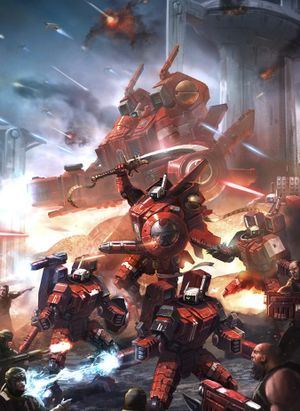 The Eight are an elite Battlesuit Strike team and war council operating out of the Farsight Enclave, led by O'Shovah himself. They are legends among the Enclaves Septs.[1]

The Eight take to the battlefield as one, a band of fearless warriors operating some of the most powerful Tau weapons systems. Despite their rebel status, the Eight are an inspirational embodiment of the Tau warrior spirit, for whom no foe is too great, and no fight so desperate that victory cannot be seized. They are as devoted as any to the supremacy of the Tau race, and it is this conviction that carries Farsight’s elite to victory over every foe that stands against them.[2]