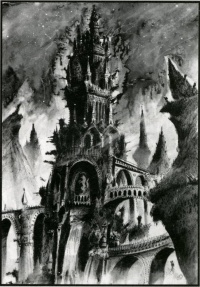 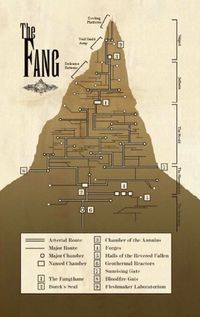 Interior of The Fang

The Fang is the Fortress Monastery of the Space Wolves chapter, located on their homeworld of Fenris.

The Fang is perhaps the greatest fortress constructed since the fortifications of the Imperial Palace on Terra. It is so big as to pierce the atmosphere of Fenris, providing a docking point for orbiting spacecraft and allowing quick access to the surface without having to use sub-orbital transport. It is clad in immensely thick armour and is protected by void shields stronger even than those on the mightiest Imperial warships. Shafts have been cut into the mountainside, concealing vast laser batteries capable of blasting the biggest ships in the galaxy. These weapons are as old as the Chapter itself, a testament to the reliability of the level of technology produced during the Great Crusade. Also, the thermal reactors powering the weapons and shields are of that age, wondrous though it is to think they still actually work.[1]

The top of The Fang is the centre of the Space Wolves' fleet dock where hundreds of ships are moored. They can be easily maintained and materials can be moved easily from surface to space via this huge fortress. It is from here that the Space Wolves set out on missions across the galaxy.[1]

Despite being almost universally referred to as "The Fang", the Space Wolves refer to their base simply as "The Aett" because this name was used in the M32 during the Battle of the Fang.[13] Aett in the own language of Space Wolves literally means "clan-home", "fireplace" or "den".[4]

A description of the Space Wolves' Fortress Monastery from the First Edition rulebook can be found here.[5] At the time of publication, the Space Wolves' homeworld was referred to as "Lucan" rather than Fenris, so the canonicity of this information is uncertain.[5][8]