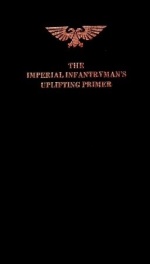 The Imperial Infantryman's Uplifting Primer is a Warhammer 40,000 background book by Matt Ralphs. It takes the form of an in-universe Imperial text that is supposedly possessed by all members of the Imperial Guard as part of their standard-issue equipment. Cover-to-cover, the only thing (apart from its very existence in your hands) marking it out as not an actual Imperial object is the Black Library publishing and copyright information printed on the second page - just underneath the Imperial copyright and publishing information.

The Imperial Infantryman's Uplifting Primer is a small book supplied to an Imperial Guardsman on commencement of service. Each Guardsman is required to have it on or close to his person at all times; not being able to produce it on the demand of a senior officer is a disciplinary offence.[1a]

It is a compendium of useful/mandatory information for any Guardsman, covering such diverse topics as arms and equipment maintenance, personal hygiene, rules and regulations of the Guard, and enemy recognition and particulars. Additionally, it features a section dedicated to acting as a prayer-book, as well as areas to be filled in by the owner, so that it may act as a record of service. The current, revised edition was published in 945.M41,[1x] although a variant issued to Imperial forces tasked with fighting in the Damocles Gulf also exists.[2]

However, despite the respect intended by the Primer's authors, troopers in the field have been known to criticize and disrespect the publication; some, for example, use the primer as toilet paper.[3]

The actual book is hard cover, denim-bound with gold/bronze leaf lettering on the cover. The pages containing prayers and litanies at the back of the book are printed on pink paper while the majority of the book is printed in black on cream. It is liberally illustrated with diagrams, forms, tables and devotional pictures.

As it is written in-universe, the actual tone of the book trends towards the blackly humorous rather than the informative, as it is basically a list of the various unfortunate ways an Imperial Guardsman can die (most of them at the hands of the Commissariat), wildly inaccurate information about various Xenos species a Guardsman may encounter, and prayers, litanies and thoughts for the day (the latter written at the bottom of every page). Even the fieldcraft and maintenance sections of the book prioritise entertainment for the reader over a more 'realistic' dry and informative format.

This brief section includes a foreword by Lord General Militant Huxlow, as well as the forms for the particulars of the Guardsman issued the Primer and the death notice for the same.

In which the Guardsman may learn the many, many, many ways in which he or she may contravene Imperial regulations and face punishment. Which tends to be death. It also includes general information on the Guard, as well as basic instruction in training and guard duty.

In which the Guardsman may find a list of their standard-issue gear - which may not be lost or be otherwise unaccounted for - as well as an introduction to and instruction in the use of other weapons and equipment.

In which the Guardsman learns exactly how important they are. Also includes information on Abhuman troop types, map-reading, scouting, pulling security, sanitation and survival techniques.

In which the Guardsmen learns of the various forms of armour-plated death that exist in the galaxy.

In which the Guardsmen learns of the inferior nature of the enemies he or she may face, such as the cowardly Orks, the idiotic Tyranids and the weak Eldar. Also features warnings against truck with the dark forces.

In which the Guardsmen learns of the various ways they may be inconvenienced by enemy action or accident, and what may be done about it. If anything.

The Benedictions of the Emperor, Inspiration Source and Uplifting Creeds

A collection of pages especially designed to provide comfort and relief in those difficult situations.