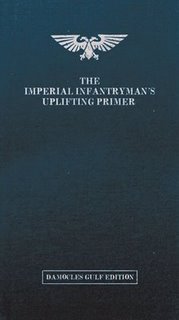 The Imperial Infantryman's Uplifting Primer - Damocles Gulf Edition is a Warhammer 40,000 lore book by Matt Ralphs. It was first published in 2003, and was reprinted on January 8, 2008 with an addendum about the Tau, thus the Damocles Gulf edition.

The Imperial Infantryman's Uplifting Primer is a small book supplied to an Imperial Guardsman on commencement of service, he is required to have it on or close to his person at all times, not being able to produce it on the demand of a senior officer is a disciplinary offence. It shows the likely enemies that will be faced, with morale boosting, if not entirely accurate (eg. Genestealer: Puny Blunt Claws) information upon them. It also describes in detail the Guardsman's equipment, and how to keep it in good functional working order. It also details Imperial Guard armour units, such as the Chimera, Leman Russ Battle Tank and their variants.

The actual book contains 112 pages of various information pertinent to an Imperial Guardsman's life. The Tau addendum contains general information about the Tau race, inaccurate propaganda (e.g., the Tau are herbivorous herd animals who panic at loud noises) and other various bits of information.

The book is hard cover, denim-bound with silver leaf lettering on the cover. The pages containing prayers and litanies at the back of the book are printed on turquoise paper while the majority of the book is printed in black and white.