The Lathes are a group of three worlds in the Calixis Sector — Hadd, Hesh and Het. 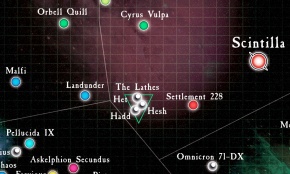 The Lathes in the galactic south west

All three planets are Forge Worlds located close together in the Golgenna Reach subsector. Their highly irregular orbits result in hyper-gravitic events, allowing the manufacture of extremely high-density ammunition and blades claimed to be unbreakable. The entire system is held in fealty to the Mechanicum of Mars and non-believers require extensive permits from high authorities to visit.[1] The population of The Lathes is estimated to be approximately five billion.[2] The majority of these natives, the menial laborers serving the Adeptus Mechanicus are large men and women, meaty and powerful, with large bones[1], often described as more Ogryn than man[2]

Following the War of Brass, the Skitarii Legions of the Lathe Worlds forces were greatly diminished. With only a wounded Legio Venator to protect them, the Mechanicum of the Calixis Sector were suddenly vulnerable. In response High Fabricator Kovikal Quietus set about discreetly drafting a new fighting force. Consisting of veterans and the most promising recruits, this new elite fighting force dubbed Venatorii would be equipped with advanced integrated weapons powered by a Potentia Coil and armoured in heavy crimson carapace armour, forged in the peculiar gravity of the Lathe Worlds. This armour has earned the Venatorii the moniker, 'Crimson Guard'. These warriors are an elite fighting force, seperate from the Skitarii and have participated in several conflicts including the Meritech Wars. They also been utilised by Mechanicus aligned, agents of the Inquisition.[3]