The Lost and the Damned are the hordes of combined Chaos forces drawing from various elements united under the command of powerful Chaos Space Marines, Daemon Princes, and other great leaders who have attracted the attention of Chaos powers.[1]

Chaos Space Marines rarely make war alone, with many of their operations involving other servants of the Ruinous Powers.[2] Influential warlords may barter with the Dark Magi of the Dark Mechanicum for possession of Daemon Engines. Others may incite hateful uprisings with cult demagogues[1] or Dark Apostles.[3] Others may summon Daemons or call upon the Traitor Titan Legions. Regardless, only those warlords most favoured by the Ruinous Powers can rise to to unite so many factions, as by nature the servants of Chaos remain in continuous war and competition with one another for the patronage and blessings of the Gods.[2]

The forces of Chaos include a multitude of lesser hosts which form the Chaos hordes, including bestial mutants, tribes of corrupted Ogryns, warbands of Renegade Knights. The Dark Apostles especially participate in the corruption of members of the Imperial Guardsmen in order to form the renegade forces which take up the fight against the Imperium.[3] 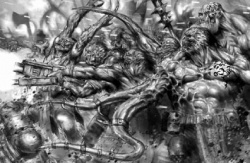 The warbands of the Lost and Damned are led by those powerful individuals who have caught the eye of the Chaos powers. This includes powerful Chaos Space Marines, Daemon Princes, Greater Daemons, Demagogues, and Arch Heretics.[1] These great leaders draw upon the strength of the Chaos hordes composed of elements of Chaos Space Marines, Dark Mechanicum, Renegades and Heretics, Chaos Daemons, Renegade Knights, and Traitor Titan Legions.[1][2] The Lost and Damned may also possess fleets of void-capable ships.[4]