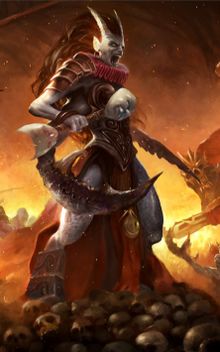 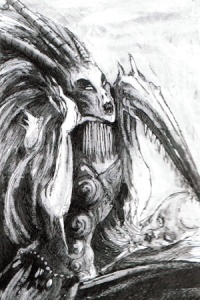 The Masque of Slaanesh is a Daemonette and was once Slaanesh's favoured dancer and chief handmaiden until she was cast out by her master. Now she is forced to dance through the mortal and immortal worlds for eternity.[Needs Citation]

During the eternal conflict that is the Great Game, Tzeentch tricked Slaanesh into battling with Khorne, a war that it could not possibly hope to win, and Slaanesh was defeated and humiliated. Seeing the dark mood of her master, the Masque took it upon herself to please it with her most energetic and scintillating dance ever. However, instead of his usual laughter and joy at such a sight, Slaanesh saw mockery and attacks on his wounded pride in each perfect combination of moves that the Masque executed. It condemned her as a traitor, and cursed her, proclaiming that if she wanted to dance, she must dance forever more.[Needs Citation]

And so the Masque was forced to dance for all eternity, across space and time, for both mortal and immortal audiences. As she re-enacts Slaanesh's greatest conquest and victories, her mask changes to match the roles of the characters she play. So powerful is the lure of the Masque's display, those who see it are inevitably compelled to join in the performance. Even Daemons are not exempt from the Masque's enchantments. As the dance goes on, the tempo rises, while the Masque's unwitting chorus struggles desperately to keep up, and eventually dance themselves to death, using up their last ounce of strength and dying breath to keep pace with her twirls and somersaults.[Needs Citation]

During the Battle of Biel-tan The Masque emerged alongside Skarbrand and was able to invade Biel-tan through a Webway Portal on Ursulia. The Masque was eventually able to hack into Biel-tan's Infinity Circuit and would have destroyed all of its souls if not for the efforts of Yvraine, who was able to summon Yncarne and foil the Daemon.[2]

The Eldar Harlequins have a performance that tells the tale of how the Masque once infiltrated one of their troupes, and entranced the audience with her whirling spell. It was only when a Solitaire appeared, and was able to match her move for move for six days and night until the Masque finally faltered and missed a step, that the spell was broken. Horrified, the Masque fled, and now seeks revenge on the Harlequins.[1]