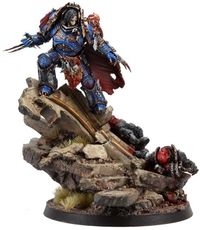 Curze in The Nightmare Mantle

The Nightmare Mantle was a customized artificer Power Armour that was worn by the Primarch Curze. It was bedecked in grisly trophies of judgement and the flayed skins of those whose sins he saw as particularly egregious or noteworthy.[1]

Following his capture on Macragge during the Heresy, the Nightmare Mantle was taken from Curze by his brother Primarchs. After he was reunified with the Night Lords on Tsagualsa a crude replica of the power armor was constructed and Curze wore these upon his death.[2]