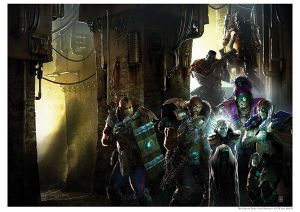 The Outcast Dead, a novel by Graham McNeill, is the 17th title in the Horus Heresy Series. It was published on October 25, 2011. It was later included in "The Novels: Volume 4" eBook collection.

The galaxy is burning. The Emperor's loyal primarchs prepare to do battle with Warmaster Horus and his turncoat Legions on the black sand of Isstvan. Such dark times herald new and yet more terrible things still to come, and when Astropath Kai Zulane unwittingly learns a secret that threatens to tip the balance of the war, he is forced to flee for his life. Alongside a mysterious band of renegades, he plunges into the deadly underworld of Terra itself, hunted like a criminal by those he once trusted. In the face of betrayal, Kai must decide where his own loyalties lie and whether some truths should be buried forever.

Following the tragedy of the Argo, Kai Zulane, an astropath and one of only two survivors, is returned to the City of Sight to retrain his telepathic skills. Following the psychic assault by Magnus the Red, a devastating warp disturbance strikes Terra and the City of Sight. Zulane is imprinted by the possessed Mistress of the Scholastia Psykana with a terrible vision of the future, knowing that his damaged psyche will hide the truth from those that seek it. Zulane is imprisoned and tortured by the Legio Custodes in order to gather the hidden information, but he is rescued by the Outcast Dead as they escape the feared prison of Khangba Marwu, having been arrested themselves for their own Legions' heresy.

The Outcast Dead, under the guidance of Atharva of the Thousand Sons, attempt to flee Terra in order to bring Zulane to Horus Lupercal. They are pursued through the Petitioners City by the Legio Custodes and a number of other Imperial personnel. During their flight, Zulane is visited in his dreams by a powerful psychic figure.

During the final stand of the Outcast Dead, Kai Zulane is able to overcome his guilt at the fate of the Argo, with the assistance of the remaining survivor of the tragedy, Roxanne Castana, allowing him to unlock the vision his mind has been protecting. The vision shows Zulane what will occur on the Vengeful Spirit and the fate of both Horus and The Emperor. In unlocking the vision, Zulane is able to relay the events of the final battle of the Horus Heresy to the mysterious psychic in his dreams, The Emperor, allowing him to understand that he must be defeated by his traitorous son in order to prevent the fall of the Imperium.