The Primarchs is an anthology and the 20th book in the Horus Heresy Series, which was released on May 29, 2012.[1]

It is the seventh volume in the Horus Heresy series to make the New York Times bestseller list, and the second such anthology, after Age of Darkness. It was later included in "The Novels: Volume 4" eBook collection.

Gathered within this anthology are four novellas focusing on some of the mightiest warriors and leaders that mankind has ever known – Fulgrim, Lion El'Jonson, Ferrus Manus and Alpharius Omegon – and the roles that they may have yet to play in a war which threatens to change the face of the Imperium forever.[1]

While the Emperor's Children descend into debauchery, Fulgrim's closest allies plot against him to purge the Legion of the daemonic influence which has begun to plague their ranks.

During the Great Crusade, Ferrus Manus finds himself lost on a xenos-held world. With destiny racing to meet him, will he reign in his aggression long enough to heed its warning?

Fighting a daemonic incursion within their fleet, the Dark Angels stumble into a conflict between the Iron Hands and Death Guard. Which side will they choose in the coming battle?

Main article: The Serpent Beneath (Novella)

When a leak is detected at the covert Tenebrae installation, Omegon assembles an elite team of operatives to undertake a top secret mission – to infiltrate the Alpha Legion itself! 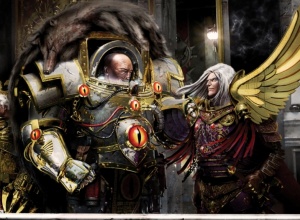