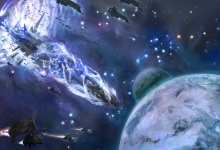 The Rock at the head of a Dark Angels fleet[8]

The Rock, also known as the Tower of Angels[3] (or Spire of Angels)[5], is the legendary home and fortress-monastery of the Dark Angels Space Marine Chapter. The Rock is an immense and powerful ship, capable of blasting even powerful Eldar fleets into oblivion during the Battle of Midpoint. Fully equipped with both Warp Drives and force fields, it is also home to many ancient and arcane technologies the Dark Angels have accumulated over the millennia. Overall operations of The Rock are overseen by the Master of the Rock.[3]

The Rock is thought to be a remnant of Caliban itself that survived the destruction of the world at the end of the Horus Heresy. The remnant is built around the original Fortress-Monastery of the Dark Angels, which survived the destruction of the planet thanks to its shielding.[7] The Rock travels around the galaxy and visits most of the Dark Angels' recruiting worlds, and the Watchers in the Dark patrol its halls; an example of a Watcher is the small hooded being that follows Supreme Grand Master Azrael around, carrying the Lion Helm. The Rock is larger than any conventional class of Imperial warship and is capable of laying waste to entire fleets with its massive array of weaponry. The Rock is further protected by a constant escort of Frigates and squadrons of Thunderhawk Gunships.[1a]

Deep within the bowels of the Rock are cells in which the Fallen Angels are held. Luther is imprisoned there, kept alive over 10,000 years after his costly betrayal of the Dark Angels. Luther rants and raves, claiming that he has no need of repentance or confession, for the Lion - who he claims is near - will soon return and absolve him.[2] Unbeknownst to any, the sleeping body of Lion El'Jonson is hidden in the heart of the Rock, guarded by the Watchers.[2]

Shortly after the formation of the Great Rift, the Rock was besieged by Daemons led by the Fallen Daemon Prince Marbas. The battle was a mere distraction and was quickly defeated, however the Fallen succeeded in setting Luther free.[6]

Unknown to the Dark Angels until Cypher informed them, for the last ten thousand years The Rock has had the ancient sentient device known as Tuchulcha hidden within it.[4]