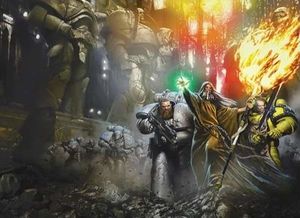 The Silent War is an anthology novel in the Horus Heresy series, which was released as a digital-exclusive in May 2016.[1]

Anthology of tales about the secret missions that underpin the entire Horus Heresy series.[1]

While loyalist and traitor forces clash on a thousand battlefields across the galaxy, a very different kind of war is being fought in the shadows. Rogal Dorn and his Legion prepare to defend the Solar System against the armies of Warmaster Horus, even as Malcador the Sigillite charges his many agents and spies with missions of the utmost secrecy. The future of the Imperium is being shaped by unseen hands... This Horus Heresy anthology contains fourteen stories by some of Black Library's top authors, including James Swallow, Chris Wraight, John French, Anthony Reynolds and many more.[1]