The Visarch is an Eldar known as the Sword of Ynnead and serves the newly awakened Eldar God of the Dead.[1]

The Visarch was originally a Biel-tan Dire Avenger Exarch of the Silvered Blade Shrine, known as Laarian Starspeaker and had considerable standing with his Craftworld[5]. He met Yvraine when she was just a mere Aspect Warrior, teaching her much of swordsmanship. Laarian grew close to his student and developed strong feelings for her. He was much saddened when Yvraine left his shrine and chose to instead become a Witch and then Outcast. When she joined the murderers of Commorragh, his spirit broke and his feelings for Yvraine diverted the course of his path. In a nigh-unprecedented decision, Laarian left his Shrine and decided to follow Yvraine.[4a]

The Visarch reappeared Commorragh at the side of the newly awakened Emissary of Ynnead, Yvraine. During this time, he posed as an Incubus in the Shrine of the Coiled Blade. As an Incubus he became infamous, known as the Scarlet Incubi. He later struck down the Shrine's Klaivex and took his position by right of conquest.[4a] He was later instrumental in Yvraine's escape from the Dark City and the formation of the Ynarri. He now acts as the guardian of Yvraine and has fought alongside her on her expeditions to resurrect Ynnead.[2] The Visarch later accompanied Yvraine to Kalisus where they brought the survivors of the Thirteenth Black Crusade to Macragge. The Visarch fought alongside Imperial forces in the subsequent Ultramar Campaign.[3] The Visarch continues to serve Yvraine as one of her chief protectors, and during the Battle of Iathglas was nearly killed by Shalaxi Helbane. His apparent death was enough to summon Yncarne, but after the battle Yvraine was able to regenerate his broken form.[4b]

In battle, the Visarch wields the Crone Sword Asu-Var and wears ancient armor of the Bel-Anshoc style.[5] 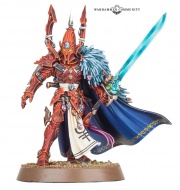