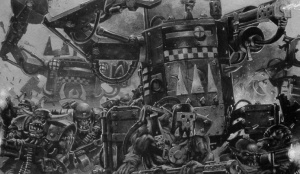 Ork forces rampage on the fields of Armageddon[1]

The Third War for Armageddon[Note 1] was fought in the latter years of M41, fifty-seven years to the day after the Second War for Armageddon. Ghazghkull Thraka was again the leader of the invasion and he was faced by his old nemesis Commissar Yarrick, whom Ghazghkull had let go following his capture at the Battle of Golgotha to make the ensuing invasion more entertaining.[2c][4a]

Following his defeat in the Second War for Armageddon at the hands of Commissar Yarrick, Ghazghkull marshaled his forces, licked his wounds, and gathered his strength for a fresh offensive. The Warboss was not deterred in the slightest by his defeat and understood that "to destroy your foe you must first know him." For Ghazghkull, the war for Armageddon had been a way to learn how the Imperium would react and deal with a major invasion. At the same time, his headaches were growing worse and a malaise was manifesting itself. He debated what to do, and was goaded by Grotsnik into returning to Armageddon despite it apparently being a violation of the will of the Gods, who instead wished he take to the stars and unite the Greenskin race. In the end, even Makari tried to talk Ghazghkull out of invading Armageddon again but was (temporarily) killed for it. Ghazghkull decided to ignore the gods and set out his own destiny.[15a] Thus it went that Ghagzhkull began preparations for an even greater invasion of Armageddon.[2b]

Over the next few years, Ghazghkull allied with another prominent Ork Warboss, Nazdreg Ug Urdgrub, known for having the best Mekboyz in the galaxy in his employ. Nazdreg's Mekboyz were particularly well known for their tellyporta technology, something Ghazghkull coveted deeply. Thus Ghazghkull struck a deal with Nazdreg, helping him against the Dark Angels during the Battle of Piscina IV in exchange for the secrets of the Tellyporta.[2b]

Ghazghkull left Piscina for the Golgotha system, intending to seize the resource-rich world and convert it into a giant factory to fuel his second great Waaagh! However, he was unaware that Yarrick had located him and was in hot pursuit. Easily overrunning the planet's defenses, in the ensuing Battle of Golgotha Ghazghkull eventually crushed Yarrick when his forces arrived, capturing the Commissar himself. However in the end the Warboss decided to let his arch-rival go as he was "too much fun."[2b]

The invasion began with a massive Ork fleet arriving in the Armageddon Sector, a fleet which outnumbered the Imperial defenders six to one. Ork Kill Kroozers made suicidal rushes against the Imperial Navy blockade of the planet and despite their skill the Imperial ships found themselves unable to turn back the Orkish tide. Worse yet, monitor stations were warning that three more massive Ork fleets were inbound to the Armageddon system. The combined fleets of Ghazghkull and his allies soon constituted the largest fleet ever to assault a world of the Imperium and Battlefleet Armageddon found itself outnumbered six to one.[4a]

As the Ork fleet arrived in the Armageddon System, Imperial forces under Yarrick made frenzied preparations. Forces from the Imperial Guard, Collegia Titanica, Sisters of Battle, and more then twenty Space Marine Chapters reinforced the world.

Six weeks after arriving in the Armageddon System, hundreds of Ork Roks smashed into the surface of Armageddon. Millions were killed as Hades Hive - the site of Ghazghkull's previous defeat - was completely annihilated by an asteroid launched from an orbiting Ork Space Hulk in an act of vengeance against Yarrick.[4a] Soon after, wave after wave of Ork landers descended upon the world, and though Imperial Navy fighters and ground defense lasers took a terrible toll upon the invaders there were simply too many incoming Orks to stop.[4a] Massive amounts of Orks also besieged Hive Helsreach, where the Black Templars under Reclusiarch Grimaldus made a courageous defense, exacting a heavy toll on the greenskins for any ground taken.[7]

Meanwhile, the true purpose of the descending Ork Roks became apparent. Slowing their descent with powerful force fields, the Roks landed on Armageddon and from them surged not only innumerable Orks but also an endless stream of heavy equipment teleported in directly from orbit. The plan was made possible only by Tellyporta technology designed by Mek Boy Orkimedes, whom Ghazghkull had in his employ.[2a] Soon Titans and Gargants beyond number were engaged in the action and took a bitter toll upon both sides in the fighting.[2c] In addition Feral Orks, born on the world shortly after the Second War for Armageddon, emerged from the equatorial jungles and spread like wildfire throughout the hives.[4a]

Hive Acheron then fell to the Orks without warning, this time captured by treachery from within. It was soon revealed that the infamous war criminal Herman von Strab, the former Governor of Armageddon whose leadership during the Second War had proven so disastrously inept, had overthrown the hive in cooperation with Ghazghkll and now ruled it as its overlord.[4a]

Again it was left to Commissar Yarrick to defend Armageddon from Ghazghkull's forces. He did this by forging the PDF and Armageddon Regiments into a perfectly disciplined fighting force, an 'unstoppable machine of iron and steel'. When Ghazghkull heard that his old nemesis was once again in the fray he redoubled his efforts and tried to break the back of Armageddon.[Needs Citation]

Yarrick also received much help from various Space Marine Chapters, as they knew all too well the strategic value of Armageddon.[2c] The Space Marines began to establish battle lines and Von Strab was hunted down and killed by a unit of Penal Legion troopers known as the Last Chancers. The situation improved dramatically for the Imperial forces as the Season of Fire broke upon Armageddon. Temperatures outside the Hives soared until even the Orks were forced inside. Faced with this new situation, a stalemate has been reached.[4b]

It was at Ghattana Bay, the location of an important water processing plant, that saw the largest Dreadnought vs Dreadnought confrontation of the war. The Ork attack had by this point stalled and the Warboss Judrog Irontoof committed every Deff Dread and Killa Kan in his arsenal to a single attack against the Space Marine lines weakened by an earlier Kommando attack. As the defenders were battered by Ork weaponry, Judrog's Dreadnought charge breached the defenses around Ghattana Bay but as they approached Gate IX, they were surprised to find a line of seventeen Venerable Dreadnoughts armed with lascannons, autocannons, and missile launchers blocking their path. At their head was Brother Damos of the Angels Porphyr, who led a devastating first salvo against the first wave of Ork Dreads. Equipped with better weapons, the Ork machines initially took heavy losses but eventually reached the Space Marine lines, though the four hundred meter advance cost them seventeen Dreadnoughts. Nonetheless the Orks still came at the Space Marines, hurling themselves against Gate IX.[8]

Flight was not the plan however, Brother Damos and his Dreadnoughts were ready for Irontoof's Orks and poured heavy fire from their ramparts and decimating the tightly packed Ork Dreadnought formation. As the Ork dreadnoughts became bottlenecked, the Space Marine Dreadnoughts cut into them in an assault led by Brother Weylands. Though not a single Dreadnought fled, the Ork machines were ultimately destroyed. Judrog's bold but unsupported attack had failed. With his final reserves now destroyed, Judrog was forced to withdraw in the face of heavy Thunderhawk air attacks. But while the Space Marines had emerged victorious, they had lost seven of their seventeen ancient dreadnoughts.[8]

Becoming bored by the growing stalemate, Ghazghkull quickly ran out of patience. He resurrected Makari once more, but this time spoke directly to the newly reincarnated Grot for the first time, stating that as a true Ork he wouldn't apologize but that he had been wrong about some things. He showed Makari the Holy War he had created on Armageddon, but admitted it could be so much greater. At that moment a Leman Russ Battle Tank appeared, blasting a hole in Ghazghkull's chest. Ghazghkull was saved by Makari, who crawled inside the tank to murder the crew within. Seeing the incident as a message from the gods, the recovering Ghazghkull admitted he had been wrong to both Makari and the Gork and Mork. He announced his attention to depart Armageddon and begin Da Great Waaagh!.[15b]

He left the conquest of Armageddon to his generals and went in search of something more entertaining. When word of this reached Yarrick he too left Armageddon with a strike force of Black Templars, determined to hunt down Ghazghkull and end things between them once and for all.[4b] Yarrick and the Black Templars were able to corner Ghazghkull at the Battle of Haunted Gulf, but the Warboss was able to elude his foes yet again.

However there were still countless Orks infesting Armageddon and the war raged. For the Orks, the war became known as the "Big Scrap"[4b] (also other name - "Ragnarork")[9] and more Orks arrived to the system with each day as word spread.[4b] The cost of the war was measured in human lives, and the death toll spiraled towards the billions. The Imperials knew one thing, however: whatever the cost, Armageddon must not fall.[2c]

The war raged into the the period known as The Blackness, which severed nearly all the worlds of the Imperium from one another. Armageddon was isolated and reinforcements en route were sent into oblivion by the Great Rift. Daemonic legions soon erupted across the planet. Amazingly, Ork and Imperial defenders would often fight alongside one another in the face of the greater threat. However such ceasefires never lasted long. The legions of Khorne and Tzeentch soon battled one another on the plains of Armageddon, with the Orks and Humans taking shelter.[10]

By the time the light of the Astronomican returned to Armageddon, the Imperial relief force arrived to find the landscape greatly changed. Fully half the planet had warped into something akin to a Daemon World, a hellish landscape merged over the top of what had once been a war-torn Hive World. The Imperial reinforcements, with elements from 9 Space Marine Chapters led by the Salamanders, succeeded in halting the ritual that would have brought Angron back to Armageddon.[10]

The arrival of Chaos forces only has seen the conflict drag on. A three-way war has emerged. Traitor warbands, Daemons, and Cults strike from the depths of space or the northern reaches of the planet while the Orks continue to harry Imperial reinforcements which are pouring in. The planet has become unstable and shudders under etheric forces. The instability is emanating from the Red Angel's Gate, and many claim Armageddon's final doom draws nigh.[11]

Notable Battles & Campaigns of the Third War for Armageddon