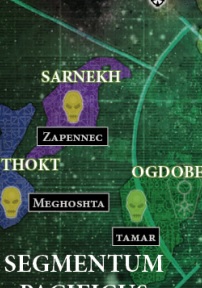 The Thokt Dynasty's coreworlds are located within the Hyrakii Deeps, a region of space within Segmentum Pacificus filled with radiation-emitting void rifts. The dynasty's Crypteks have learnt to harness this radiation to power the dynasty's weapons and soldiery, both of which can be seen to emit an eerie blow glow as a result.[2a] This energy is not only limitless but surrounds their warriors on the battlefield, causing their enemies to sicken and die.[3]

In 994.M41, the dynasty's fringe worlds were invaded by the Orks of Waaagh! Bludtoof. Entire worlds were turned into killing fields in order to grind down the Orks in a war of attrition.[2c]

The dynasty's symbol is derived from the position in the sky of the Hyrakii Deep's stars relative to the crownworld of Meghoshta.[2a]