The rewards more than outweigh the risks should we succeed. Imagine it! The Emperor reborn and walking amongst his people as a living god. Who can say such a thing is wrong — Inquisitor Crescere. From Inquisitorial Report TH/21/36: “The Incunabla Incident" 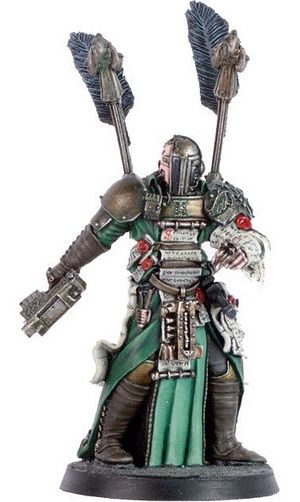 The Thorian faction's core ideology, the resurrection of the Emperor, in fact dates back to the very end of the Horus Heresy, long before the Thorians' namesake Sebastian Thor lived. Two of the original founders of the Inquisition, Promeus and Moriana, looked into means by which the ruler of mankind might be resurrected. However after Moriana began to look to Dark Powers in her quest, Promeus and his followers banished the Inquisitor to the Eye of Terror. The disciples of Promeus, the Promeans, began a quest over many centuries to restore the Emperor to a mortal body.[1a]

Eventually, a splinter faction of the Promeans, the Horusians, began to form. These disciples were continuing the work of Moriana, collecting texts on the nature of Horus and his possession by Chaos. These tomes, considered heretical, brought Promeans and the Horusians into conflict. In the end however the Horusians prevailed, and few true Promeans remained by M34. Eventually, Stalia von Dressen was able to organize anti-Horusian cells across the Imperium. Eventually her crusade led her to research the nature of the Emperor's resurrection and the founding of the Inquisition for two decades on Terra, leading her to believe that resurrection was a hopeless cause. This led her to lead an anti-resurrectionist purge within the Inquisition. By M35 resurrectionism was once again all but eliminated from the Inquisition's goals.[1a]

However it was during the Age of Apostasy in M36 that the resurrectionists again emerged, this time led by Sebastian Thor. After Thor's apparent divine victory in ending the Reign of Blood by Goge Vandire, resurrectionism, not closely associated with Thor's own faction of it (Thorianism) became accepted within the Inquisiton once more.[1a]

Generally considered as pro-resurrectionists, Thorians believe that the Emperor´s spirit can be transferred into another host, referred to as a Divine Avatar, an especially gifted, charismatic and saintly individual. Many other Inquisitors work against this agenda, because if such a thing happened the Imperium would be torn apart in a massive conflict between believers and non-believers, resulting in a devastation similar to the aftermath of the Horus Heresy.[Needs Citation]

The Thorians believe that Thor was divinely inspired and that he moved with the Emperor’s light burning within him. To many Inquisitors of the day, it was obvious that Thor was imbued with a measure of the Emperor’s will and charisma. They believed that it was not the first time that the Emperor had acted in such a way, citing such figures as St. Capilene and the hero Josmane as previous vessels of the Emperor walking amongst his people.[Needs Citation]

The Thorians believe that the Emperor’s near-death at the hands of Horus allowed him to break the final bonds between the crude matter of corporeality and ascend to assume his true nature as a deity. His spirit wanders the void, travelling as a whisper in the warp, flitting from place to place and perhaps even through time. Thorian dogma tells that the Emperor has manifested his spirit through his chosen vessels many times when his people needed him, but that these bodies were able to contain only the barest fraction of his power and soon withered and died. They await the day that He shall be reborn and lead his people onwards in the continuation of the Great Crusade.[Needs Citation]

To this end, the Thorians closely study the interaction of consciousness, energy and the warp, believing that if they can manipulate these energies correctly they can channel the Emperor’s spirit into a suitable vessel and effectively resurrect the Master of Mankind. There have been many attempts to create a body suitable for such an important ritual, including the disastrous events on Incunabla, but so far none have succeeded. Followers of the Thorian philosophies constantly scour the galaxy for beings they term “Avatars”, individuals of such power that they may prove able to contain the Emperor’s soul once more – or be turned to evil by the Ruinous Powers.[Needs Citation]

Many Thorian inquisitors are found within the Ordo Malleus, where their greater understanding of the immaterium grants them an insight into how the rebirth of the Emperor could be achieved. Others may be found among the Ordo Hereticus, though there are few within the Ordo Xenos, save those who believe manipulation of alien psychic-engineering, such as that of the Eldar may provide valuable insights. Inquisitors of all orders foster the growth of resurrectionist cults throughout the Imperium, as they provide useful foot-soldiers for an Inquisitor when he must raise an army to achieve his ends.[Needs Citation]

Opponents of the Thorians claim that were the Emperor to be reborn it would cause a schism and civil war more deadly than that begun by Horus. Believers and unbelievers would fight to the death and the galaxy would be consumed in an apocalyptic holy war. They cite the Thorian’s naivete, claiming that they cannot know what would come back, that the Emperor himself might be changed, altered by his long absence from the flesh. And more importantly, what of the Astronomican? The Imperium would surely collapse without the Emperor’s guiding light to steer ships through the Empyrean. The risks inherent in what the Thorians propose are too great for many to contemplate but, despite this, the Thorians are determined upon their course.[Needs Citation]

Thorians have no formal emblem, but make considerable use of the skull symbol, representing the Emperor-in-Death, a scroll clasped in a hand, representing the hand of Promeus as he left the first conclave, and a broken lock, representing solving of the riddle of the Divine Vessel.[1b]