Thracian Primaris is the pre-eminent industrial Hive World of the Helican Subsector and after 241.M41, its capital as well. 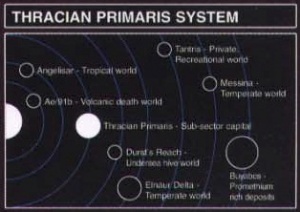 Hives now cover more than 70% of its surface, including what is left of its oceans. One of its greatest sights for the visitor is the kilometre-wide Avenue of the Victor Bellum which runs almost to the centre of the Hive and ends in the Spatian Gate. The gate is constructed of glossy white aethercite. It is so large that the Dome in its ceiling has its own local weather pattern; even Titans are said to be able to pass through it without bending.[Needs Citation]

When Hive Ferax fell prey to a cannibal Cult uprising in 071.M41, a number of nearby Space Marine Chapters mustered a strike force in response and under Force Commander Zha'Khan, of the Marauders Chapter, they deployed to the wastes near the embattled Hive and waited. Once the Cult had scoured Hive Ferax of its population, the hunger-maddened cannibals surged forth from the Hive in a vast horde in search of more food - only to find themselves under the massed guns of the strike force, who opened fire and destroyed the Cult.[2]

Lord Helican, once he returned from a great quelling of the sub-sector's civil war, made a great parade, said to have stretched well over 20 miles, consisting of two Space Marine Chapters (the White Scars and Aurora Chapter), an unknown number of Imperial Guardsmen (approx. 100,000-500,000), 300 members of the Inquisition, several Imperial Titans and many more organizations also took part in the Triumph. Gregor Eisenhorn and Gideon Ravenor were just two of the many Inquisitors present in the vast collection of personnel. During the Triumph, Chaos tainted pilots strafed the parade, killing thousands, if not tens of thousands of citizens, Guardsmen, and Space Marines with their gunfire and through crashing their damaged planes. This is where Ravenor was so horribly wounded and, miraculously, Eisenhorn escaped unhurt. Following the disaster, much of the planet was enveloped in brief but brutal riots, worsened by the escape of over 30 alpha-plus level psykers.[3]