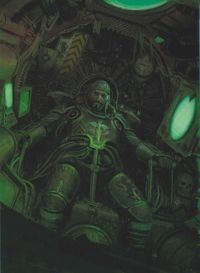 A Knight pilot on a Throne Mechanicum[2]

The Throne Mechanicum is a piece of technology used by Imperial Titans and Knights that allows them to be piloted by Humans.[1]

A Noble does not drive a Knight – he merges with it. Using interface sockets surgically inserted into his brain, the Noble is wired into the control platform known as the Throne Mechanicum. Once a pilot is plugged into his Knight during the Ritual of Becoming, the Throne allows his own thought patterns to control the machine’s movements. In return, the Noble receives sensory feedback from the Knight, allowing him to move with a fluid grace that only the war machines of the Eldar can best.[1]

A Noble imprints his own personality upon the Throne Mechanicum – traits that echo and are exaggerated in the machine, often lasting long after the Noble has died. However, the mind-link technology also directly affects the psyche of the Noble himself, implanting strong positive associations with notions of fealty, obligation and hierarchy, as well as a deep respect for the Noble’s ancestors. How such technology works and why it was originally installed remain a mystery, even to this day. It seems most likely that the mind-altering feedback routines were intentionally designed and installed during the Dark Age of Technology – a safeguard feature meant to limit the potential of a pilot to go rogue or turn upon those he was meant to protect.[1]