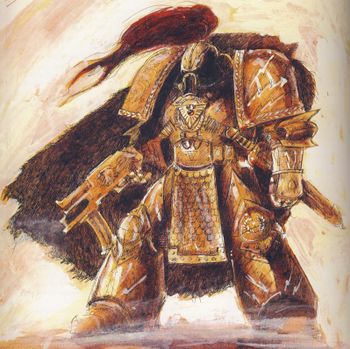 The Thunder Warriors (also known as the Thunder Legion[7] or Legiones Cataegis[10a]) were the genetically engineered warriors of Terra created by the Emperor of Mankind to unite the homeworld of humanity beneath His rule in the 30th Millennium. They were gene-enhanced warriors created by the Emperor and served as the precursors to the present-day Space Marines. Wrought to be living weapons, the Thunder Warriors were known to be physically stronger, more savage, and more potent in combat than the later Astartes, though they were not as long-lived.

Thunder Warriors were the elite super-soldiers that marched with the Emperor to conquer Terra in the Wars of Unification. The engineering that the Emperor used to create the Thunder Warriors, whilst creating superior fighters, was not as efficient as what was used later to create the Space Marines[3], nor was the technology as advanced or the geneticists as entirely willing.[5a] These proto-Astartes were organized into twenty regiments of no more than a few hundred warriors, each named by the Emperor himself.[4] 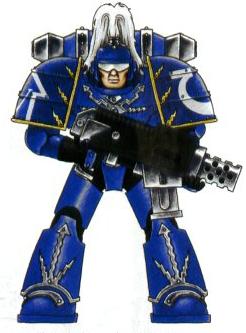 Like the later Legiones Astartes, the Thunder Warriors were organized into twenty Legions, each led by a Primarch. However unlike the Astartes Primarch's, Thunder Warriors Primarchs were not physically different from the warriors they led. Instead they were simply superlative warriors who were promoted to the position by the Emperor.[10a]

Thunder Warriors were large, greater in size than most Space Marines. In their earliest days the Thunder Warriors wore metal armor with leather strappings and wielded Lasrifles.[10a] Despite physical deterioration, the few Warriors that survived the end of the Unification Wars were easily more than a match for an Astartes, and had even outperformed Custodians during combat engagements. Even severely deteriorated Thunder Warriors shown capable of fighting multiple Astartes at once.[5b][8] They were made highly resistant to psychic attack, perhaps because of the sorcery they would regularly face during the Age of Strife, with any attempts at mental attack causing severe pain to the psyker.[8] They had tremendous upper body strength that was considered to be unparalleled, which when coupled with their early model of power armor, made them virtually unbeatable in close combat.[2][5b][8] The leg strength of even a heavily physically deteriorating Thunder Warrior made them capable of kicking completely through the torso of a normal human.[8] Their bones were thicker than that of an Astartes, with a Thunder Warrior capable of shattering the skull of an Astartes with a headbutt.[2] Their reflexes were also extremely enhanced, allowing a Thunder Warrior to dodge the shot from a plasma gun, while already engaged in and focusing on fighting two other Astartes.[8]

The Thunder Warriors genetic template was unstable and they were prone to fits of bloodlust and instability. Short-lived and rife with both mental and physical health issues, Thunder Warriors were known to suddenly drop dead or stop following orders.[10a] Unlike the later Legiones Astartes, they lived as warlords and relished battle. Their human emotions were not expunged from them, and they were known for their dry humor.[10b]

Towards the end of the Unification Wars, a group of at least two dozen surviving Thunder Warriors under one of their Primarchs Ushotan took part in the Palace Coup to seek revenge and death in battle. The rebels were all massacred by the early Legiones Astartes in their very first engagement, while Ushotan was slain by Constantin Valdor.[10b] Bands of Thunder Warriors continued to exist in hiding however, with some escaping off-world. These were later hunted down and destroyed by the First Legion of the Legiones Astartes.[11]

Early in the Great Crusade, a small group of surviving Thunder Warriors calling themselves the Dait'Tar were among the renegades of the Cerberus Insurrection. The Emperor dispatched the XII Legion (later known as the World Eaters) to quell the uprising and punish the traitors. Despite their physical decline, and being severely outnumbered by one of the greatest Space Marine Legions, the Thunder Warriors managed to slaughter four to five times their number in Astartes. The Insurrection was eventually stopped however, after several hours of intense close quarters fighting.[5b]

At least one Thunder Warrior survived to the time of the Horus Heresy, Arik Taranis, who had taken many names in the interim, including Babu Dhakal. Taranis had learned some of the techniques the Emperor had used to create him and tried to make his own army.[2] He suspected that the Emperor had deliberately engineered his kind with a limited lifespan, though he personally hoped it was simply a defect; Thunder Warriors that did not die in battle suffered from cellular degeneration or mental instability, and often had relatively short lifespans.[5a] Eventually, after another Thunder Warrior, Ghota, encountered a group of traitor Astartes known as the Outcast Dead and slew one of its members, Taranis was able to cure the genetic instability of the Thunder Warriors, though not before suffering considerable degeneration himself.[2]

Four Thunder Warriors had also survived on Terra to serve as gladiators in depths of The Maw, near slums known as the Swathe, for despite their physical deterioration they were still mighty warriors. They had been kept alive by Tarrigata, a former astropath, who served as their master and helped keep them alive through transplanting the organs of the deceased Thunder Warriors. One of them (Kabe) eventually died after being incapacitated in a gladiator battle against a Chrono Gladiator, before being ceremonially executed by a fellow Thunder Warrior. Another (Gairok) became mentally unstable and was slain when he attacked one of the other Thunder Warriors. The third (Vezulah Vult) died fighting a demonically possessed Alpha Legion warrior, after being blinded by the Astarte's acidic spit and eviscerated. The last (Dahren Heruk) was given an honoured death by a Custodian, after he defeated the possessed legionary and saved the Custodian's life.[8]

It is possible that the World Eater and later Blackshield Endryd Haar was a Thunder Warrior or another kind of proto-Astartes who was successfully transformed into a Space Marine. He was far larger, stronger, and quicker than other Space Marines; furthermore, he was extremely brutal and mentally somewhat unstable despite lacking the Butcher's Nails. Malcador singled him out as a special case. Haar himself confirmed that he had fought alongside the Emperor in the Unification Wars and called the Dait'Tar "brothers".[14][15][16]