Thunder hammers are weapons of ancient design, utilizing a power field similar to a power sword or fist, and used by Space Marines and Daemonhunters, primarily by Terminator Assault Squads and characters with access to the relevant armoury[1].

Where other power weapons emit a constant energy field, the thunder hammer is designed to energize the power field only upon impact, enabling it to conserve energy until it is actually needed, and allowing the weapon to deliver a particularly devastating blow[2]. Upon impact, the thunder hammer's blue energy field explodes with a thunderous crack, more often than not smashing through armour, and leaving a smoking hole that crackles with blue sparks[2]. The power unleashed on impact is such that a warrior not in Terminator armour will likely be knocked over. The weapon's main drawback in combat is its slowness in delivering a strike compared to most other close combat weapons.

The thunder hammer is often combined with a Storm Shield[2], giving the wielder a combination of unmatched lethality and superb protection in close combat. It has in the past been recorded that thunder hammers could release their titanic energies in one attack, self-destructing the weapon and killing not only the wielder but any surrounding enemies[3]. However, this function has either been removed from currently-used thunder hammers, or it is not considered an appropriate tactic. 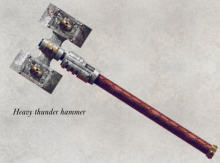