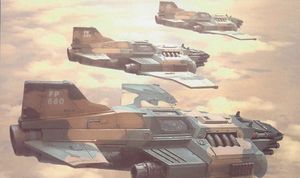 The Thunderbolt heavy fighter is the workhorse of the Imperial Navy.[2] A rugged and reliable design, with good firepower and maneuverability, the Thunderbolt has been in service for centuries and remains well-liked by its crews.[1a]

The Thunderbolt primarily serves as an air superiority fighter, given the task of hunting down enemy bombers or engaging enemy fighters in order to establish air superiority over the battlefield. However one of the chief advantages of the design is its versatility, allowing it to fulfill other types of missions. Thunderbolt fighters frequently serve as high altitude escort fighters for flights of Marauder Bombers. They can also be adapted to serve as low level fighter-bombers, night fighters and reconnaissance aircraft.[1a] Typically, Imperial Navy Thunderbolt Wings operate thirty aircraft.[2]

Attrition among Thunderbolt pilots is enormous, with few surviving for very long once deployed. Those that do survive may become deadly fighter aces remembered as heroes of the Imperium.[5]

The Thunderbolt is a tough aircraft to destroy, built around an armoured superstructure and cockpit.[2] Twin F122v afterburning turbofans gives the Thunderbolt a good top speed in atmospheric flight, while a rocket booster engine allows it to operate in the vacuum of space and for fast take-offs when mounted on ground-based hydraulic ramps. The Thunderbolt should not be confused with a true "star-fighter" like the Fury Interceptor though, as its space capabilities are used primarily when deploying from an orbiting spacecraft into the atmosphere or likewise returning.[1a]

The Thunderbolt Fury is one of the most common variants of the standard Thunderbolt fighter. This variant replaces the fighters Autocannons with a pair of twin-linked Avenger Bolt Cannons. The combination of mass-reactive Bolt shells and the high rate of fire makes for a dogfighting aircraft of punishing repute. Many squadrons see a Fury or two amongst their ranks, though few consist of Furies alone as they are known to eat through ammunition at an astonishing rate.[5]